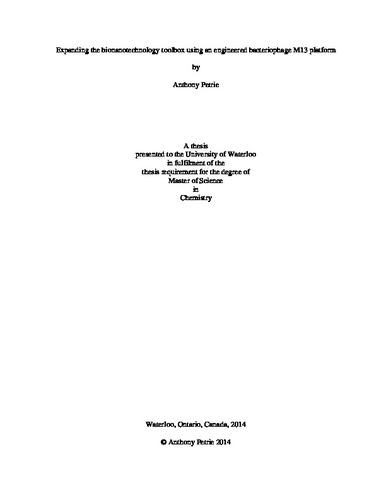 M13 is a filamentous virus which has received recent attention as a component for device and material applications. M13 phages have measurements of approximately 6 nm in width and 900 nm in length. M13 is composed of the coat proteins, pIII, pVI, pVII, pVIII, pXI, of which, the most abundant coat protein, pVIII is present in approximately 2700 copies. In order to further develop M13 as a well-characterized nano-scale scaffold, azide-containing M13 phages capable of bioorthogonal reactions were produced. The approach taken in this work was to metabolically incorporate the unnatural amino acid L-azidohomoalanine into the pVIII major coat protein of M13. The positioning of L-azidohomoalanine was accomplished using site-directed mutagenesis and the characterization of several M13 mutant strains was carried out. For L-azidohomoalanine incorporation, appropriate media conditions had to be developed and tested. It was found that having both L-methionine, and its analogue, L-azidohomoalanine, in growth media was required to obtain both high M13 yields and L-azidohomoalanine incorporation. Two bioorthogonal approaches to labelling the resultant M13-azide constructs were examined: the modified Staudinger ligation and the strain-promoted azide-alkyne cycloaddition reaction. Bioconjugation of M13-azide phages with 5(6)-carboxytetramethylrhodamine, a fluorescent dye molecule, resulted in an estimate of 340 reactive azide groups per phage for the best mutant constructs, A9M and S13M. Transmission electron microscopy confirmed that the architecture of M13 mutant strains developed here were not impacted by bioconjugation of biotin to M13-azide constructs. Considerable work has been carried out on the pIII minor coat protein of M13 as the functional handle of M13. Rather than be used in place of the methodologies currently used for manipulation of M13, the methods examined in this thesis work are expected to be complementary to those approaches. This is expected to expand upon to methodologies by which researchers currently manipulate and organize structures on the nano-scale.