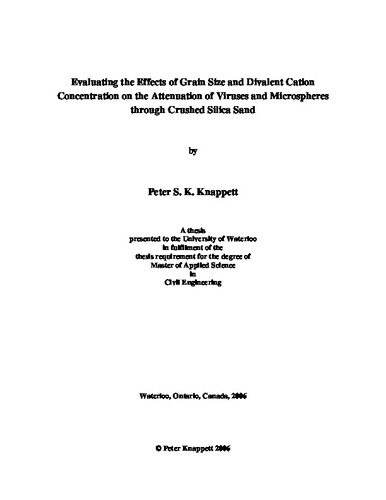 Over the last decade in North America, an increasing number of microbiological drinking water regulations have been used to manage groundwater resources that are potentially influenced by surface water. Regulations such as the Ontario Ministry of Environment Regulation 505, which requires at least a 60 day groundwater travel time between surface waters and drinking water wells, have been created with limited understanding of subsurface pathogen transport processes. Groundwater Under Direct Influence studies (GUDI or GWUDI in USA) are conducted to assess the need to treat well water at an extraction point. Currently, there is a lack of knowledge regarding factors that affect the transport of pathogens through porous media at the surface water-groundwater interface. Such information is required to supply sufficient quantities of drinking water in a cost effective and safe manner. <br /><br /> Factors that affect pathogen transport through porous media include: properties of the pathogen (i. e. surface charge, size, and morphology), properties of the granular media (i. e. mineralogy, size, texture, angularity) and properties of the water (i. e. pH, ionic strength and content, and natural organic matter). This study examines the effects of ionic strength, grain size and influent virus concentrations on pathogen transport in porous media. Fourteen column tests were conducted using the bacteriophage MS2 and 1. 5 µm microspheres; two commonly used non-pathogenic surrogates representative of human viruses and bacteria, respectively. Two size distributions of crushed silica sand, with median grain diameters of 0. 7 and 0. 34 mm, and two ionic strengths of 8 and 95 mmol/L were used. A 2<sup>2</sup> partial factorial design was used with a minimum of two replicates of each combination of the parameters. <br /><br /> The results show that complete breakthrough of both viruses and microspheres occurred in medium sand at low ionic strength. It was found that increasing ionic strength by Ca<sup>2+</sup> addition precluded breakthrough of MS2 in both the medium and fine sands. This represents a greater than 8 log reduction in peak effluent concentration and essentially complete attenuation. <br /><br /> In fine sand, with low ionic strength water, a 5 log reduction in peak MS2 concentrations was observed. In the same sand at high ionic strength, no MS2 broke through the column, corresponding to a greater than 8 log removal. Since complete attenuation occurred in both grain sizes at high ionic strength, the effect of higher ionic strength in the fine sand was indistinguishable from the effect observed from raising the ionic strength in the medium sand. <br /><br /> In contrast to the viruses, microsphere transport was essentially unaffected by increasing ionic strength under the conditions investigated. A 1 log reduction in peak concentration was observed in the high ionic strength water in the medium sand. In spite of this, grain size had a profound effect on the attenuation of microspheres. There was no evidence of microsphere breakthrough in any of the fine sand columns at the low or high ionic strengths, yielding a greater than 5 log reduction in microsphere concentration associated with grain size alone. The effect of varying virus concentration was also investigated. It was found that varying the concentration of viruses between 10<sup>5</sup> and 10<sup>7</sup> pfu/ml had no discernable effect on their observed transport characteristics; normalised peak breakthrough concentration, percent attenuation and retardation relative to a bromide tracer. <br /><br /> Based on the results from this Thesis, in a riverbank filtration environment, there is reason to expect that, at comparable water qualities and in similar porous media, multiple logarithmic reductions of viruses and bacteria would occur over the much longer (than column length) flowpaths associated with RBF. There is also reason to expect this attenuation capability to vary based on riverbank grain size and water chemistry.

Peter Knappett (2006). Evaluating the Effects of Grain Size and Divalent Cation Concentration on the Attenuation of Viruses and Microspheres through Crushed Silica Sand. UWSpace. http://hdl.handle.net/10012/906