Migrants, Urban Village, and An Open Community - A Case of Yangji, Guangzhou, China 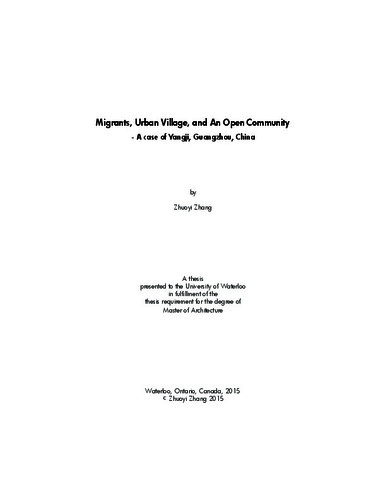 Massive migration is one the most significant phenomena of China’s urbanization. In the thirty years since the "Reform and Open Up" policy began, Guangzhou, as the center of the Pearl River Delta, has experienced significant economic growth and urban expansion and attracted a vast number of migrant laborers. Seen as the product of the rapid urbanization, urban villages accommodate the majority of migrants by providing low-rent housing, but at the same time they cause many social problems. Guangzhou’s general approach to the redevelopment of urban village overlooks the serious issues migrants are facing and their demand of affordable housing. The reconstruction not only disregards the traditional village context but also drives the migrants away. Yangji village presents all characteristics typical of urban villages. It is located near the new center of Guangzhou and is currently being redeveloped. With the aim of improving the migrants' standard of living and helping them gradually integrate into the city, this thesis proposes a new way to redevelop Yangji village in the urban context of Guangzhou by providing migrants with government-subsided low-rent housing and enhancing the potential for social interactions in the neighborhood. Taking into consideration the overall city development of Guangzhou, the benefits to all its citizens as well as the former village context and its population, the thesis proposes a design for an open community that is a mixture of different populations, functions, natural and historical elements.