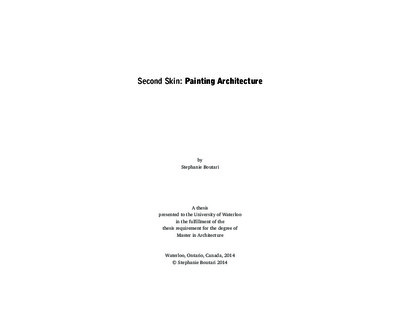 This thesis is a creative and conceptual inquiry into the role of surface or skin in architectural theory and practice, and the nature of its relationship to architecture’s form, structure, and depth. The surface of architecture is presented as a site of conflict between two traditionally opposing imperatives of architecture: to represent social and cultural identity, and the art of its designed construction or tectonics – its structural order, material qualities, modular assembly, modes of production, and functionality. While the former is tied to stylistic traditions, the latter is inherently connected to technology. Modern architectural discourse has traditionally remained partial to the tectonic, maintaining a hierarchical opposition between depth and surface, structure-skin, natural-artificial, authentic-synthetic, material-immaterial, bare-decorated, neutral-coloured, and the spatial versus two-dimensional, wherein the former is always privileged over the latter. In contrast, the thesis concurrently observes how contemporary architectural practice is increasingly preoccupied with the production of surface effects. Conditions of globalization and the current digital age have contributed to an image-saturated environment in which architecture and media are increasingly harder to separate. Crossovers between architecture and art combined with the proliferation of decorative, communicative, and responsive architectural surfaces continue to blur the line between what constitutes architecture versus decoration, ornament, or cosmetics – attributes intrinsically tied to the role of appearance and representation. Through the act of painting architecture, the thesis proposes an alternative view of the surface that aligns more closely to contemporary practices. It posits that architecture’s prerogative lies not only in the creation of form, spatial relationships and tectonics, but also in the production of atmosphere and perceptual experience. This expanded notion of architecture sees the surface as capable of generating spatial, immersive qualities. Here, the two-dimensional or ‘superficial’ is not opposed to depth but instead engenders it, juxtaposing both materiality and image, the concrete and imaginary, architectural and painterly. By re-conceptualizing the skin as a producer of architecture rather than a by-product of it, this thesis argues that the architectural surface is as valid an investigation as questions of form, structure, or depth, and that it constitutes a legitimate practice within the field of architecture.