Quantum quenches and the holographic duality. 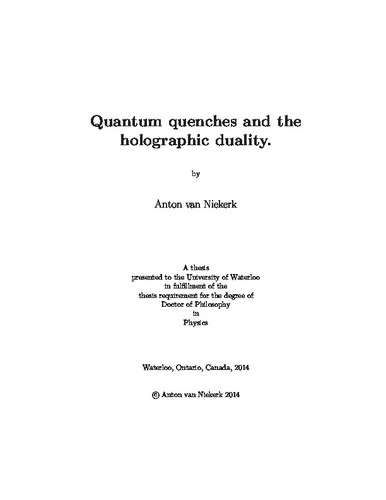 We study quantum quenches in a strongly coupled conformal field theory, using the gauge/gravity duality. In the first part of the thesis, we consider a perturbative thermal quench of a field theory in four spacetime dimensions by a relevant operator of arbitrary dimension 2 ≤ ∆ ≤ 4. This is done by numerically evolving the dual scalar field in five- dimensional asymptotically anti-de Sitter spacetime containing a large planar black hole, using a finite difference method. We holographically calculate the expectation values of the operator and of the field theory’s stress-energy, as well its thermodynamic quantities. We find universal scaling behaviours of these quantities in the limits of both fast and slow quenches. Further, in the limit of fast quenches we find universal behaviour in the excitation and equilibration time of the operator expectation value. The excitation time scales to zero with the quenching time, while its equilibration time becomes constant and independent of the quenching rate. In the second part of the thesis, we analytically derive the scaling observed during fast quenches in the first part. We work in the nonperturbative regime with a strongly coupled conformal field theory living in d spacetime dimensions, globally quenched by an operator O_∆ of dimension d/2 ≤ ∆ < d. By taking the limit of very fast quenches, the dual gravity theory becomes linearized, as one needs only consider the near-boundary behaviour of the dual scalar field. For a given source for the scalar field, we analytically solve for the expectation value of the quenching operator, as well as the change in the energy density. We find that these quantities exhibit the scaling observed in the first part of the thesis, generalized to higher dimensions. In the final part of the thesis, we again study quenches of a strongly coupled conformal field theory living in four spacetime dimensions, this time perturbatively quenched by a fermionic mass term. We focus on fast, global quenches of the thermal field theory by its holographic dual of a collapsing scalar field in five dimensional anti-de Sitter spacetime containing a black hole. Using an improved numerical method of Chebyshev pseudo- spectral methods, we evolve the profile of both the metric and scalar field. We calculate the time-evolution of the apparent and event horizons of the planar black hole, as well as the two-point function of a high-dimension operator, and the entanglement entropy of a strip on the boundary. These quantities probe thermalization of the field theory at different length scales. We find that the two-point function and entanglement entropy have longer thermalization times for wider separations, and that their thermalization times exhibit linear scalings with separation for wide surfaces. We also find that the thermalization times of the two-point function and entanglement entropy can exceed that of the operator expectation value.