Genesis and hydrological function of an African mire: understanding the role of peatlands in providing ecosystem services in semi-arid climates 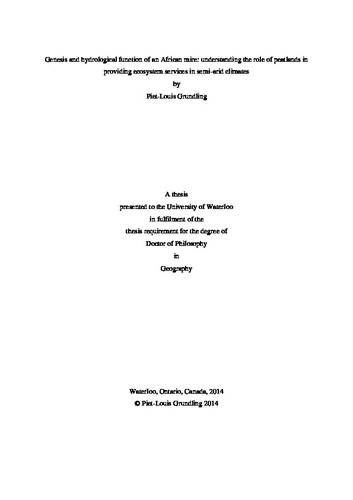 The effects of changes in climate or landscape on wetland ecosystems in drier regions need to be considered within the context of natural processes. Hydrological processes are a key component in the development and maintenance of wetlands. The source of water, for instance, can determine a wetland’s vulnerability to a changing landscape and environment. To understand these integrated processes and functions, the genesis and hydrology of a large natural mire (1 462 ha), located in the subtropical eastern part of South Africa has been studied, with a focus on peat development, surface and groundwater exchanges and the water balance of the mire Mfabeni Mire is a groundwater dependant ecosystem that was formed in the Late Pleistocene and continued to develop during the Holocene. The basal peat of the mire was dated at ca 44 000 cal years Before Present at a depth of 9.9 m. The average accumulation rate during the Late Pleistocene was 0.15 mm/year and during the Holocene it was higher at 0.3 mm/year. Despite climate change over this period, peat formation has hardly been interrupted, suggesting that the system has been able to almost continuously sustain peat formation processes. The infilling of a north-south paleo-valley with peat (11 m) resulted in a reduction in permeability for eastward-flowing groundwater, which forces a rise of the groundwater as peat accumulated. This set of circumstances created a consistent and permanent discharge of groundwater into the peatland, allowing for the uninterrupted formation of peat over an extended period. Wetlands with inputs from regional groundwater sources are buffered against climatic variability, and are therefore less vulnerable to changes in climate. Mfabeni Mire is an example of such a dynamic ecosystem that is presently adapting, as in the past, to a changing environment. Wetlands are an integral part of the hydrological cycle and their position in the landscape determines their contribution in regulating flow to downstream ecosystems. The average rainfall for the Mfabeni peatland was determined over a period of 48 months and was 942 mm/year compared to the long term annual average of 1 364 mm/year (1961 to 1989) at the coast (Wejden, 2003). The stream outflow of Mfabeni responds rapidly to larger rainfall events (≥40mm) and low flow periods coincide with drier periods with a relatively low baseflow (360 m3/day) sustained by groundwater inputs from the western inland dunes. The annual flow is more than 2 orders of magnitude less than the long term annual average rainfall indicating the importance of evapotranspiration and groundwater losses in the system. Direct rainfall on the fen due to its relatively large size is important and together with groundwater inflows these water inputs maintain a high water level in the fen (80% of the time less than 0.4 m below surface), with the surface inundated 10 - 20 % of time. Groundwater efflux from the western inland dunes provides substantial recharge towards Mfabeni at the swamp forest on its western boundary, while coastward hydraulic gradients from the dune complex through the wetland are evident. At the swamp forest the discharging water has a similar δ2H - δ18O ratio than the groundwater from the western inland dunes. However, only a small portion of groundwater from the inland dunes is flowing through the mire towards the coast in the east. However, a more likely alternative is that rainwater (the dominating influx into the system) from the sedge fen recharge at the eastern margin of the fen to the eastern dunes. In these dunes the δ2H - δ18O line follows similar slopes (i.e. having an evaporation signature) to fen waters, suggesting that evaporatively enriched water from the fen enters the eastern dune at the margin. The major portion of groundwater from the inland dunes is forced to discharge southwards into Lake St. Lucia due to the plug effect of the lesser permeable peat in Mfabeni Mire as the hydraulic conductivity of the peat (10-4 to 10-5 cm/s) is more than an order of magnitude less than in the dunes (10-2 to 10-3 cm/s). The surface flow and subsurface flow along the surface gradient are more critical in keeping the peatland wet and maintaining its functions as the groundwater contribution through the peat are limited due to the very low hydraulic conductivity of the deeper more decomposed peat. Based on its water balance, Mfabeni Mire is, primarily functioning as a control mechanism of the regional water table in order to maintain wetness of the accumulated peat within the mire. Groundwater inflow (at 14 mm [< 2%] of the yearly water balance) is therefore an important component, not only in developing, but also in maintaining peatland integrity by ensuring waterlogged and anaerobic conditions in drier periods. The groundwater outflow is an insignificant component (0.3 mm/year) compared to the other water balance components. The annual outflow through the Nkazana stream was 9 mm/year with storage accounting for 3 mm/year. Evapotranspiration losses from the system are the largest component of the Mfabeni Mire water balance (1053 mm/year) and have exceeded rainfall (1031 mm/year) during the period of monitoring by 22 mm (2.1% of the rainfall). The swamp forest evapotranspiration rates were higher than the sedge/reed fen contributing 34% of evapotranspiration whilst only covering 28% of Mfabeni Mire’s surface. In conclusion, the majority of the groundwater discharged into Mfabeni Mire was lost to evapotranspiration, and the Nkazana stream, although perennial, is characterised with persistently low flows during dry periods, providing a freshwater refugia for plant and animals at the inflow to Lake St. Lucia. However, the value of Mfabeni Mire is more likely in dampening climate turbations, thereby contributing to steadier groundwater conditions in a landscape where seasonal change and long-term drier periods are major ecological drivers. This creates also a more stable environment for adjacent ecosystems. Consequently peatlands in semi-arid climates should be recognised as an asset in natural resource management and their potential to support adjacent ecosystems should be protected through proper planning and conservation practices supported by appropriate research.