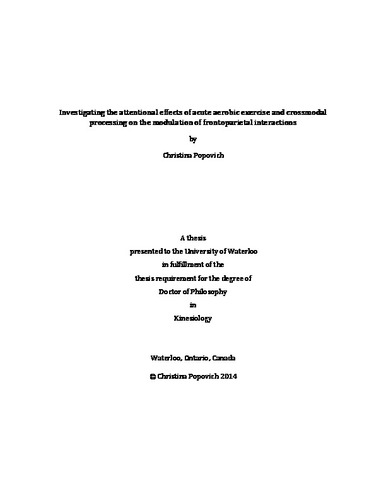 The sense of touch commences when afferent sensory signals from the periphery ascend via the spinal cord to the cortex. At the cortical level, incoming peripheral signals are susceptible to neuronal modulation at the primary somatosensory cortex; the principle region responsible for tactile perception. This modulation is largely influenced by two attentional mechanisms: 1) Bottom-up attention whereby salient stimuli automatically capture attention; and/or, 2) Top-down or selective attention, whereby relevant sensory signals are voluntarily selected for in-depth cognitive processing, while irrelevant signals are ignored. Selective attention to both task-relevant stimuli as well as to crossmodal sensory interactions can facilitate neuronal responses at very early stages in modality-specific sensory regions. Efforts to understand the mechanisms underlying top-down attention suggest that the prefrontal cortex (PFC) has a critical role in the modulation of modality-specific regions by gating or suppressing irrelevant sensory information. Recent evidence suggests that an acute bout of moderate intensity aerobic exercise upregulates PFC excitability thereby facilitating cognitive tasks requiring top-down attentional control, particularly in older populations. However, the specific contribution of each sensory system during attentional processing and, importantly, how these interact with the required behavioural motor goals remains unclear. It is also unclear whether acute bouts of moderate intensity aerobic exercise modulate cortical regions downstream from the PFC, such as the somatosensory cortex. This thesis will aim to address these questions in order to gain a better understanding of the neural mechanisms underlying somatosensory processing, and whether aerobic exercise can be used as a plausible intervention strategy for sensory processing impairments that are often associated with normal aging.