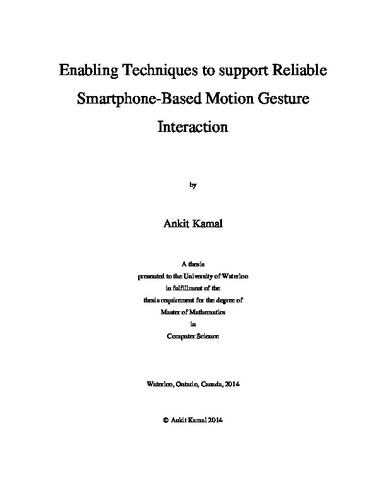 When using motion gestures - 3D movements of a mobile phone - as an input modality, one significant challenge is how to teach end users the movement parameters necessary to successfully issue a command. Is a simple video or image depicting movement of a smartphone sufficient? Or do we need three-dimensional depictions of movement on external screens to train users? In this thesis, we explore mechanisms to teach end users motion gestures and analyze the user’s perceived reliability of motion gesture recognition. Regarding teaching motion gestures, two factors were examined. The first factor is how to represent motion gestures: as icons that describe movement, video that depicts movement using the smartphone screen, or a Kinect-based teaching mechanism that captures and depicts the gesture on an external display in three-dimensional space. The second factor explored is recognizer feedback, i.e. a simple representation of the proximity of a motion gesture to the desired motion gesture based on a distance metric extracted from the recognizer. Our results show that, by combining video with recognizer feedback, participants master motion gestures equally quickly as end users that learn using a Kinect. These results demonstrate the viability of training end users to perform motion gestures using only the smartphone display. Regarding user’s perceived reliability of the gesture recognizer, the effects of bi-level thresholding on the workload and acceptance of end-users were examined. Bi-level thresholding is a motion gesture recognition technique that mediates between false positives, and false negatives by using two threshold levels: a tighter threshold that limits false positives and recognition errors and a looser threshold that prevents repeated errors (false negatives) by analyzing movements in sequence. By holding recognition rates constant but adjusting for fixed versus bi-level thresholding, we show that systems using bi-level thresholding result in significantly lower workload scores on the NASA-TLX. Overall, these results argue for the viability of bi-level thresholding as an effective technique for balancing between different types of recognizer errors.