Tales of a Flood 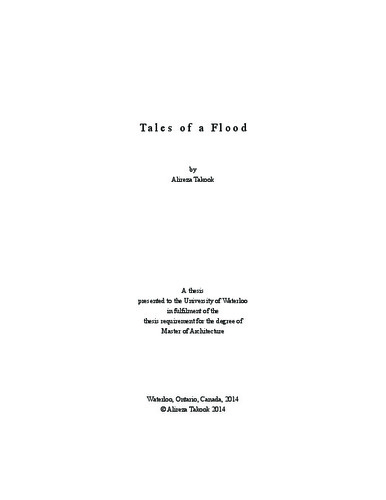 This thesis is a story of a flood as seen through the eyes of an architect. The narrative explores the relationship of the young architect with his physical surroundings, using the context of a city that goes through a destructive natural phenomenon. The story aims to answer this question: Why is the spiritual quest of the architect for a deep understanding of his natural world important for his career? The hero sees himself as part of a society that is mainly responsible for shaping the new environment of the city. He notices the great influences of architecture on the way people relate themselves to nature. In experiencing the flood he sees the vulnerability of human settlements, perceives the restrictions the natural world imposes on us and learns to appreciate its generosity and beauty; and he realizes that he can transfer this vision to the rest of society through his design. It is only when he grasps the notion of humanity as a single fraction of this planet , when he acquires modesty and stops taking all that nature offers for granted, that he is able to build in accordance with nature’s harmony and his very own nature. In depicting the process of self-awareness for the architect, the flood becomes a representation of nature’s power, its strong presence and interference in the city’s built environment. The state of the architect’s soul and his perception evolve with the rain, and with the rising and receding of the water. The story consists of five chapters. At first there is ignorance. Everything appears calm. The architect is engaged in the rise of his career, and he’s unaware of what is missing from his life. In the second chapter, a feeling of anticipation emerges when the first warning signs of the flood appear. The architect might not take it very seriously, yet he begins to feel worried. At the same time, an inner excitement sparks in him, an aspiration to know this strange natural phenomenon. In the third chapter, during his exploration, the great flood strikes with all its fury and its devastating force. The architect is shocked; he’s struck with a power much greater than himself, the city, and its people. He sees that neither he nor others have any control over the situation. Thereafter, with the start of the fourth chapter, he has to face the real destruction of the city. Only then does he observe how all that was thought to be durable was in fact fragile; he is humbled like everybody else. Finally, in the last chapter, and through creating a work of architecture, his realization reveals itself. The city and the architect begin to rebuild, but this time he has a new understanding of nature and his own role as the builder. The architect is reborn with the reconstruction of the city.