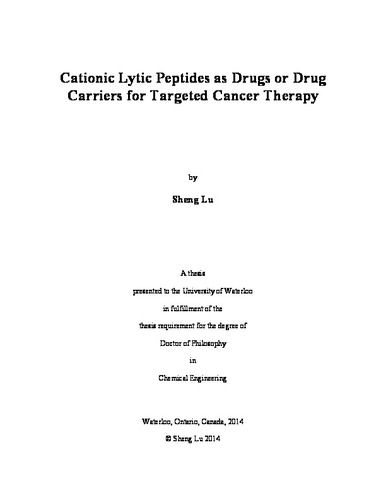 Cationic lytic peptides (CLPs) have emerged as new anticancer agents with a new mode of action. This category of peptides is given the characteristics of overall positive charges and amphiphilicity, inducing cell death by disrupting integrity of cytoplasmic membranes or depolarizing mitochondrial membranes. Cationic lytic peptides show advantages to conventional chemotherapeutics in preferential killing of cancer cells and ability to avoid general mechanisms of multidrug resistance associated with cancer cells. The biocompatibility and the biodegradability of many CLPs are other advantages. These properties make CLPs promising therapeutics for cancer therapy. Although significant progress has been achieved over the past decade, high activity and high specificity towards cancer cells, as well as enhanced stability in serum, are still needed for clinical usage of CLPs. To address these issues, this thesis focuses on three aspects: a) the molecular mechanism of the preferential activity of CLPs on different lipid membranes, which is the main cause for the CLP selective cytotoxicity; b) stimuli-responsive design in CLPs for self-guided delivery; c) utilization of CLPs as delivery vehicles for the hydrophobic anticancer drug ellipticine (EPT). The last aspect is to take advantage of CLP’s capability to encapsulate hydrophobic compounds and deliver to cancerous cells. The studies include: (i) investigation of the CLP induced leakage on liposomes with various lipid compositions; (ii) characterization of the stimuli-responsive properties of the CLP and the properties of CLP-ellipticine complexes; (iii) evaluation of the selective cytotoxicity of the CLPs and CLP-ellipticine complexes on various cell lines; (iv) evaluation of the anticancer activity of CLPs in vitro and in vivo. The peptide C6, an 18-mer arginine-rich peptide, was found to adopt an amphiphilic helical conformation on 1-palmitoyl-2-oleoyl-3-sn-glycero-phosphocholine (POPC) membranes, and induce membrane leakage. The POPC liposome leakage and A549 cell death induced by C6 was shown in a concentration-dependent manner. The amount of C6 required to achieve a given level of membrane damage, as measured by efflux of fluorescent dye or cell mortality, increases linearly with lipid concentration or cell count. The hydrogen bonding between arginine residues of C6 and cholesterol-rich membrane was found to play an important role in the lytic activity of the peptide, as evidenced in both the leakage study and molecular dynamics analysis. The effect of hydrogen bonding was also observed in subsequent cytotoxicity studies performed on A549 (lung cancer cells with low cholesterol content), MCF-7 (breast cancer cells with high cholesterol content) and erythrocytes (abundant cholesterol in membranes). These results provide a new insight in tuning the activity of CLPs against cholesterol-rich membranes by modulation of hydrogen bonding. The peptide C6 was shown to possess moderate selectivity towards cancerous cells in vitro. By comparing the IC50 values, C6 was ~2-fold more effective against A549 and MCF-7 cells than NIH-3T3 fibroblast cells. Intratumoral injection of C6 in an A549 nude mouse tumor model resulted in a marked reduction in tumor size. Except for being a therapeutic agent, C6 was found to be able to stabilize neutralEPT in aqueous solution. The cytotoxicity study showed that C6-EPT complexes were more efficient in inhibiting the growth of A549 cells than either C6 or EPT alone. At the IC50 of C6-EPT complexes, neither C6 nor EPT alone was toxic at their complex concentration, demonstrating the synergistic effect between C6 and delivered EPT. Neutral EPT showed comparable cytotoxicity towards A549 and NIH-3T3 cells; in contrast, C6-EPT complexes showed ~2-fold higher activity than C6 against A549 cells, and comparable cytotoxicity to C6 against NIH-3T3 cells. These results indicate that C6 could enhance the efficacy of EPT (synergistic effect) and selectively deliver EPT in accordance with its own selectivity. To explain the enhanced cytotoxicity of C6-EPT complexes and selectivity of C6-EPT complexes, a “CLP-assisted uptake” mechanism was proposed: the membrane lytic action of C6 could increase cell membrane permeability, facilitating the cellular uptake of EPT, resulting in the enhancement of cytotoxicity. As C6 is shown to be less active against NIH-3T3, less permeability is induced by C6 on NIH-3T3 cell membranes than A549 cell membranes, leading to different degrees of enhancement. This is the essence of the selective delivery. Stimuli-responsive strategy is widely used in drug delivery systems to improve delivery efficiency and reduce side effect, but CLP with stimuli-responsive cytotoxicity has not been reported. C8, a stimuli-responsive cationic peptide, was designed based on our amino acid pairing principle (AAP). The C8 peptide sequence contained five types of amino acid residues, arginine, isoleucine, asparagine, histidine and tryptophan, which are alternatively arranged in the sequence. According to the properties of the side chain of the amino acids, positively charged arginine residues provide repulsive electrostatic forces, while isoleucine residues and asparagine residues provide attractive hydrophobic interactions and hydrogen bonding, respectively. The ionizable histidine residues could provide either hydrogen bonding or electrostatic repulsion depending on their protonation status. Controlled by the balance of intermolecular forces between repulsive and attractive interactions, the peptide can self-assemble into β-sheet rich nanofibers or disassemble into unstructured monomers. C8 was shown to be a triple-responsive self-assembling peptide: the pH affects protonation state of the three histidine residues, temperature affects hydrogen bonding and hydrophobic interactions, and the presence of urea interferes with the formation of hydrogen bonds. Cytotoxicity studies confirmed that the nanostructure formation of C8 could work as the “switch” to control the lytic activity: the nanostructured C8 is non-toxic while the disassembled C8 monomers are toxic. This work showed the potential of CLPs to deliver themselves for stimuli-triggered (self-guided) delivery. The potential of C8-mediated EPT delivery system was also investigated. The C8 nanofibers were found to encapsulate neutral EPT in aqueous solution at pH 8.0, and disassemble at pH 4.0, releasing protonated EPT. In addition to the enhanced efficacy and selectivity found in C6-mediated system, C8-EPT complexes further showed pH-triggered cytotoxicity: the nanostructured C8-EPT complexes/co-assemblies showed minimal cytotoxicity, and became cytotoxic after disassembling in acidic environment. The studies on C6- or C8- mediated EPT delivery systems demonstrate the potential of using CLPs as multifunctional carriers for hydrophobic drugs.