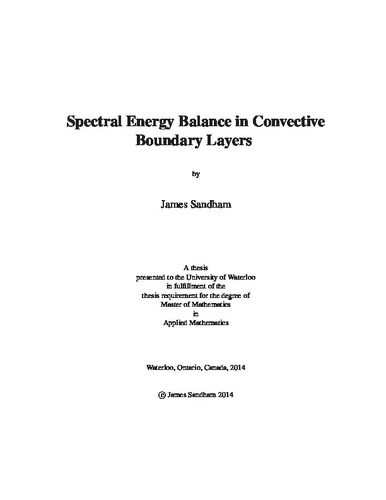 In his pioneering 1941 papers, Kolmogorov derived that the energy spectrum follows a universial form within a range of wavenumbers removed from both the forcing and dissipation and depending only on the wavenumber and the rate of dissipation. Analysis of the spectral kinetic energy budget can help explain the dynamics of the energy spectrum. Each term in this budget, representing nonlinear transfer, external forcing, and viscous dissipation, have been extensively studied in the idealised triply periodic case. In this thesis we apply these ideas to the study of convective boundary layer turbulence for both the dry and moist cases. To this end, the large-eddy simulation technique is employed to numerically integrate the anelastic Navier-Stokes equations. Each term in the spectral budget is computed and dependence on surface heating and water vapour flux, grid resolution, and domain size is investigated. It is found that the buoyancy term acts as a relatively large-scale forcing, i.e. horizontal scales of the boundary layer thickness. Energy at large-scales is then transfered to small scales by the nonlinear term where it is then removed through dissipation. This down-scale energy transfer is consistent with three-dimensional turbulence theory. It is also found however that the forcing term, while peaked at large-scales, actually extends all the way to the small scales. Also, despite increases in resolution, the transfer spectrum exhibited no range of constant spectral flux. Both of these results indicate that the convective boundary layer setup differs from the assumptions used in deriving the -5/3 inertial range scaling. Indeed, the kinetic energy spectrum itself did not exhibit an exact -5/3 scaling in the present study. Instead the spectrum was found to follow a shallower power law closer to -4/3, likely as a result of the broad spectrum of buoyancy flux.