Hunting For: Lessons on Architecture in Cree Territory 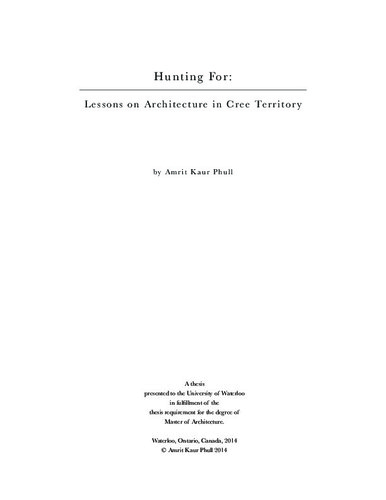 Canada’s subarctic region of James Bay, extending from the southeastern rim of the greater Hudson’s Bay, is seated at the interface of diametrically opposed climates, cultures, geologies, and ecologies. With the European settlement of Canada came the division of its land and its First Peoples––both of which were later reassembled in order to access and unearth resource-rich territories. Despite aggressive attempts by foreign newcomers to reshape the land and its stewards, the Cree have gained an unprecedented level of political and economic prowess among all First Nations, though not without sacrifice. In Cree culture, good health and key relationships to the world are forged through the hunt. By exploring animal behaviours, sinews, muscles, and bones, this thesis navigates tensions between North and South in an effort to move toward a more responsible practice of architecture in this subarctic context. A culmination of architectural research, reflections, and actions over the course of a winter season spent residing and working in the Cree Nation of Wemindji is represented. Five hunts are contained in this work, for geese, power, ourselves, moose, and rabbits. Each hunt is an exercise in, and architectural reflection of, self-awareness.