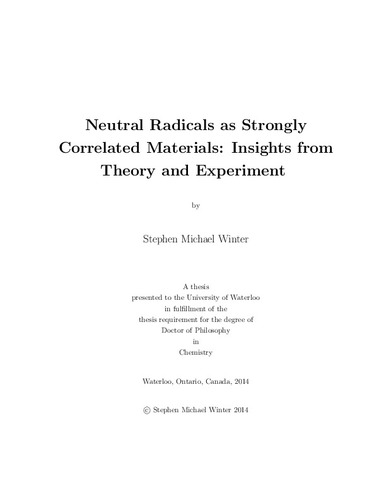 Neutral organic radicals have been pursued for conductive and magnetic solid state properties associated with their unpaired electron. Historically, synthetic challenges and design limitations restricted these materials into Mott insulating states as a result of a strong Coulomb repulsion preventing the mobility of electrons. As a result, electrons were localized to their parent radicals, and exhibit only weak magnetic interactions. Recent synthetic advances by the Oakley group have allowed access more strongly interacting regimes in neutral radicals, where the kinetic and potential energies are in competition, and the electrons are on the verge of delocalization. This regime is characterized by a variety of strong magnetic interactions, and, under pressure, metallic states have been accessed for the first time. For this reason, it is important to consider the placement of these radicals with respect to other ``strongly correlated'' materials at the border between metals and magnets, which has proved a fruitful region, hosting unconventional high $T_c$ superconductors, colossal magnetoresistive oxides, and other materials of technological interest. The purpose of this thesis is to consider radicals within this context, as well as introduce theoretical and experimental methods for probing this emerging class of correlated solids. We consider, in particular, the role of orbital degrees of freedom on the electronic and magnetic properties. To this end, we present a general framework for computing magnetic exchange interactions incorporating Hund's rule coupling and multiple orbitals in the vicinity of the Fermi level. We extend this framework to include spin-orbit coupling, which directly mixes the spin and orbital degrees of freedom over wide energy scales. This effect leads to anisotropic exchange interactions, which are responsible for a wide variety of magnetic phenomena in heavy selenium-based radicals. A new ab-initio method for constructing effective Hubbard models is presented, which allows us for the first time to directly compute the magnitude and character of anisotropic interactions for organic materials. In order to directly probe the effects of spin-orbit coupling, we have performed magnetic resonance experiments on an isostructural series of heavy selenium-based radicals. We demonstrate conclusively that the observed effects are the result of anisotropic exchange interactions, and find excellent agreement between the experimental and theoretical results, both at ambient, and high pressures. The modes of magnetic order are investigated over a range of pyridine-bridged bis-dithiazolyl radicals. On the basis of symmetry analysis, such materials may be grouped according to the sign of magnetic exchange along their $\pi$-stacks, with ferromagnetic interactions required for the appearance of a net moment, either due to bulk ferromagnetic order or spin-canting in antiferromagnets. We find evidence for a strong multi-orbital ferromagnetic contribution to the interactions between stacks in a selection of Se-based radicals. However, the empty orbitals responsible for this effect are not sufficiently low in energy to contribute to the states in the vicinity of the Fermi level in the solid state. This observation has implications for the response of these materials to pressure, which enhances solid state bandwidth, and prompts a transition from an insulating magnetic state to one exhibiting metallic properties above 6$-$8 GPa. We compare the properties of this metallic state to those predicted using the Dynamical Mean Field approach. We further consider how the modification of the orbital manifold may stabilize metallic states at lower pressures, and without need for synthetically challenging Se incorporation. The first materials considered are hybrid dithiazolyl/thiadiazinyl radicals for which additional orbitals may be introduced near the Fermi level through judicious choice of exocyclic groups. However, despite demonstrating a new and general synthetic pathway to these radicals, we find that the introduced orbitals do not satisfy the requirements for hybridization with the SOMO band appearing at the Fermi energy. Instead, we investigate the properties of sulphur based oxobenzene bridged radicals. These materials are found to have an exceedingly low-lying empty LUMO that is strongly coupled to the SOMO through Hund exchange. The interaction of the LUMO and SOMO allows metallic states to be accessed as low as 3 GPa, and generates strong ferromagnetic interactions. We investigate this Mott transition through infrared measurements, and introduce a phenomenological model for the evolution of the electronic structure, which is is confirmed through Dynamical Mean Field calculations. On the basis of this model, we consider chemical modifications to further tune the properties of these radicals, which leads to a nearly metallic material already at ambient pressure, and a spin-orbit coupled system that can only be understood outside the context of Moriya's standard treatment of anisotropic exchange. Viewing neutral radicals within the context of other strongly correlated materials not only provides insights into their properties, but also suggests routes to future functional materials. The most dramatic and exotic properties are often found where different energy scales compete, as in the kinetic and potential energy in the vicinity of the Mott transition. The results of this thesis suggest neutral organic radicals may additionally be influenced by spin-orbit effects and Hund's rule coupling of similar magnitude, the full exploration of which will no doubt lead to novel properties.