A Study of the Detection of Defects in Ceramic Insulators Based on Radio Frequency Signatures. 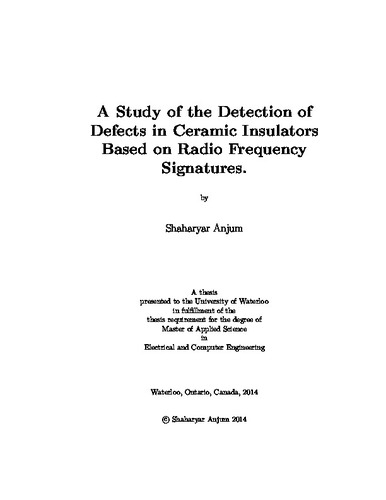 The presence of defects in outdoor insulators ultimately results in the initiation of partial discharge (PD) activity. Because insulation failure and the consequent breakdown of power equipment can occur due to the cumulative adverse effects of partial discharges, it is important to detect PD activity in its early stages. Current techniques used in PD off-line analyses are not suitable for detecting defective insulators in the field. The work presented in this thesis involved the investigation of a number of cases of insulator defects, with the goal of developing an online RF-based PD technique for monitoring ceramic disc insulators that exhibit a variety of defects. The first three classes examined were an intentionally cracked ceramic insulator disc; a disc with a hole through the cap, which creates internal discharges; and a completely broken insulator disc. The fourth class involved an external corona noise using a point-to-plane setup. The defective discs were considered individually and were also incorporated into strings of 2, 3, and 4 insulators as a means of capturing the radiated RF signatures under external high voltage AC power. The captured RF pulses were processed in order to extract statistical, spectral, and wavelet packet based features. Feature reduction and selection is carried out and classification results pertaining to each feature-set type were obtained. To classify the discharges arising from different types of defects, an artificial neural network (ANN) algorithm was applied to the extracted features, and recognition rates of more than 90% were reported for each class. In addition, the position of the defective insulator within the string was varied and high defect classification results exceeding 90% were reported regardless of the position.

Shaharyar Anjum (2014). A Study of the Detection of Defects in Ceramic Insulators Based on Radio Frequency Signatures.. UWSpace. http://hdl.handle.net/10012/9006