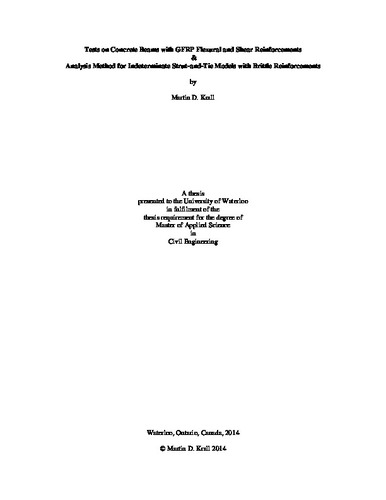 This thesis is a summary of research on the use of glass fibre reinforced polymer (GFRP) bars and stirrups as internal reinforcement for concrete beams. Fibre reinforced polymer bars are geometrically similar to conventional steel reinforcement. They are made of a bundle of long glass fibres bound together by a polymer matrix. The bars are strong when loaded in tension parallel to the fibres, and weak when loaded in any other direction. Fibre reinforced polymers are linear-elastic-to-brittle-rupture materials. Unlike steel reinforcement, bent FRP shapes must be made at the time of manufacture, before the polymer cures. Fibre reinforced polymer stirrups, and other bent shapes, are known to prematurely rupture at the bends. Initially, this was a concern for the shear design of FRP reinforced concrete beams; however, the phenomenon is generally accepted by those who work with the material and aspects of the phenomenon are considered in the provisions of modern FRP reinforced concrete design codes and standards. On occasion other researchers observed full utilization of the straight portion strength of FRP stirrups, and one study suggested that the longitudinal bar arrangement may impact stirrup utilization. Therefore, the experimental program described in this thesis was devised to investigate the influence of longitudinal bar arrangements on GFRP stirrup utilization for beams failing in diagonal shear-tension. However, the experimental beams all failed in a form of shear-compression & strut-crushing and not by diagonal shear tension, so no stirrups ruptured and the original objective could not be tested. The failure modes were concrete controlled and the experimental results indicated deep beam behaviour. The original analysis method was precluded by the unintended failure modes, so an element of novelty was incorporated into the research by applying an analysis method for strut-and-tie modelling of steel reinforced concrete that did not require the assumption of steel yielding to find a lower bound solution. That method was developed by Kim and Yun (2011a). A generalized form of the method was modified for this research to account for FRP, which necessitated modifications to other aspects such as the failure conditions and element geometry. The modified method is referred to as the Indeterminate Strut-and-Tie (IST) method throughout this thesis. Current literature on the strut-and-tie modelling of FRP reinforced concrete focuses exclusively on deep beams without stirrups, which are modelled by determinate strut-and-tie trusses. Without the yielding assumption it is not possible to solve an indeterminate strut-and-tie truss without resorting to traditional structural analysis methods. The novelty of the IST method is not simply the application of Yun’s work to FRP reinforced concrete, but that it is also the only method capable of finding a lower bound solution to FRP reinforced deep beams with indeterminate strut-and-tie trusses. The IST method uses traditional structural analysis methods to solve for the forces in a strut-and-tie truss. The concrete struts are modelled using one-dimensional, non-linear material behaviour that is modified with softening coefficients as described in Yun’s research. The method applies load in increasing increments and at each increment the stiffness matrix updates by accounting for changes in concrete strut elasticity. The IST method is also capable of modelling other beam behaviours such as strains and deflections. The research found that the IST method was the best at predicting the strength of the experimental beams when compared to both the best available academic model and the most modern design standard.