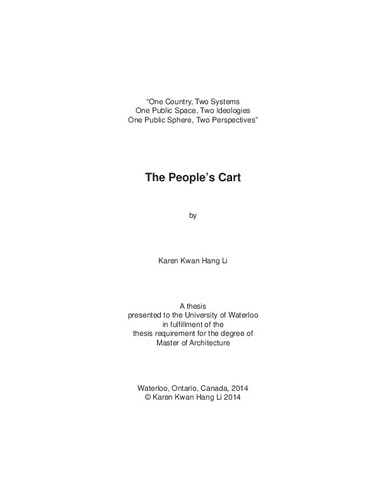 In 1842, China signed a treaty that leased Hong Kong to Great Britain for 99 years as a result of China’s loss in the Opium War and its trading of tea for opium. This agreement changed the fate and destiny of the Chinese that lived in Hong Kong compared to those who were living in Mainland China. The territory was stripped of the traditional Chinese characteristics of politics and ideology and the old systems were replaced by the influence of the Western culture. Hong Kong’s unique identity is created with a combination of traditional Chinese cultures and the British influences that shaped the city from law, politics, education, language, food, and the way of thought. In 1997, the British returned Hong Kong to Chinese sovereignty and there began the introduction of the concept of “One Country, Two Systems”. The concept, with the combination of China’s “Open Door Policy” since 1992, helped create a new character of Hong Kong that attracted much attention across the world with the anticipation of how Hong Kong could become a bridge for China to connect with the rest of the world. Hong Kong became a territory that held many differences to Mainland China in terms of character of spaces, density of architecture, personalities of people, and the disappearing of Chinese traditional culture that were very much affected by the capitalist mindsets that controlled the society and the life of the people. The attractiveness of Hong Kong and the Open Door Policy attracted many Mainland Chinese to visit. Due to the cultural differences of the two groups of Chinese, many confl icts began to arise in public spaces which became an issue for the “One Country, Two Systems”. Most of the conflicts between the two groups of Chinese arising in public spaces in Hong Kong are born from the differences in the ways of behaving, speech, and thinking. Accordingly, the conflicts can be said to originate from the differences in ideology between the Hong Kong Chinese and Mainland Chinese societies. Hong Kong’s public spaces can be divided into two groups: the first are government owned and the second are private enterprises. The ideology reflected in the two spaces are often affiliated with capitalist influence, where it is either surrounded by towers of architecture that reflect the businesses and investments in Hong Kong by foreign companies or surrounded by advertisements, small retail, and big shopping malls. My thesis explores ways to connect the two cultures so that they can exist alongside each other and provide a common ground for them to voice their differences and commonalities. I want to introduce an intervention that can be inserted into public spaces in Hong Kong that will help the Hong Kong Chinese to connect and redefi ne with the Chinese culture that is disappearing and at the same time, help the Mainland Chinese to appreciate the hard work that Hong Kong Chinese have invested into their society. This intervention is to stimulate a process to help Hong Kong Chinese to distinguish their own unique identity that has been lost in the process of colonization and one that will truly reflect the concept of “One Country, Two Systems”.