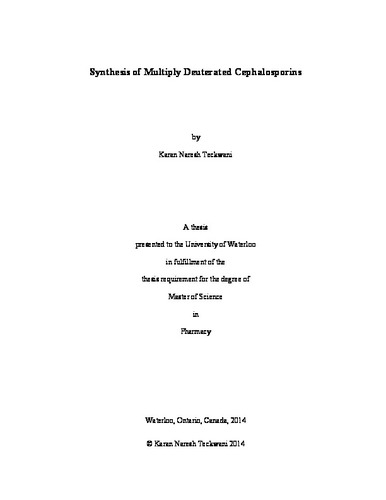 Antibiotics are one of the greatest accomplishments in the field of science. They have been extensively used since the time of their discovery. Amongst all the antibiotics, the -lactam class of antibiotics have been the most clinically used agents. However, the process of bacterial resistance towards the antibiotics is becoming an alarming situation in the present time. Due to the wide spread use of antibiotics, many Gram-positive and Gram-negative pathogens developed resistance against them. Various pathways are known via which the bacteria develop resistance towards the -lactam antibiotics, among which, the production of -lactamase enzymes is the major cause of bacterial resistance. Presently, many pharmaceutical companies and research groups are still interested in developing novel cephalosporin derivatives, which would act as antibiotic as well as -lactamase inhibitor. The Dmitrienko research group at the University of Waterloo has been developing novel C3ʹ benzoylthio cephalosporin derivatives. These potential agents are proposed to possess extended spectrum activity against pathogens that have developed multidrug resistance (also called “Superbugs”). Preclinical pharmacokinetic studies of these novel C3ʹ benzoylthio cephalosporin derivatives will be conducted after their synthesis. The availability of core isotopic labelled cephalosporin will permit efficient synthesis of internal standards for any novel cephalosporin derivative. The main goal of this thesis work was to synthesize a multiply deuterated cephalosporin core. When this project was initiated, a survey of the literature revealed a previous attempt to perform H/D exchange at C2 position of cephalosporin sulfoxides but no attempts to incorporate deuterium at C3ʹ has been reported. In this study, C2 and C3ʹ of cephalosporin core were the proposed sites to incorporate deuterium. The first objective was to perform a H/D exchange at the C2 position of a cephalosporin core. A H/D exchange reaction was performed with cephalosporin sulfoxide 3.3 using a mixture of benzene and D2O at 80 oC to give 78% deuterium exchange at the C2 of 3.3 as determined by 1H NMR. In order to increase the deuterium exchange another experimental condition were used in which, compound 3.16 (benzhydryl ester of 7-ACA, phenylacetylated at C7) was heated at 50 oC in presence of DMSO and Methanol-OD. NMR studies revealed that 90.2% deuterium incorporation had been achieved at each of the prochiral positions C2 of 3.16. After the successful completion of objective 1, the second objective was to synthesize a C3ʹ monodeuterated derivative. Eventually after certain attempts, C3ʹ hydroxyl cephalosporin 3.20 was oxidized to give the corresponding aldehyde 3.21, which was reduced by sodium borodeuteride to give the monodeuterated C3ʹ hydroxyl derivative 3.27. The third objective of this thesis work was to combine the results of H/D exchange at C2 and deuterium incorporation at C3ʹ using functional group interconversion to synthesize a trideuterated cephalosporin analogue. The core trideuterated C3ʹ alcohol 3.44 was synthesized from 3.11 (7-ACA) in 10 steps with an overall yield of 5.9%. In order to reduce the number of steps and to increase the overall yield a modified route was achieved to synthesize trideuterated cephalosporin 3.44 in 8 steps starting from 3.11 (7-ACA) with an overall yield of 19% and a isotopic purity of 87.5% (determined by NMR spectroscopy). Mass spectrometric analysis of 3.44 indicates that the ratio of trideuterated to dideuterated molecules in material is 5 to 1.