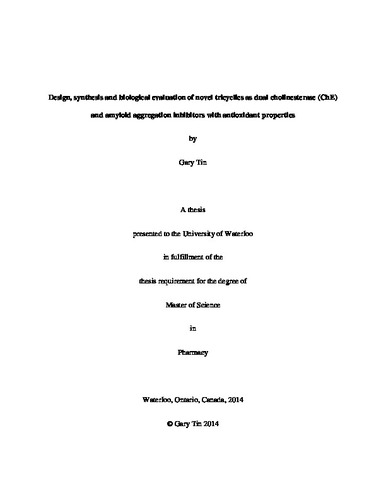 Alzheimer’s disease (AD) is a complex neurodegenerative disease affecting the cholinergic region of the brain. Its prevalence is steadily increasing and it is becoming one of the highest costing diseases to modern society. Current drug therapies only provide symptomatic relief and are not a viable option for long-term treatment. Thus, there is a need for more effective disease-modifying therapeutics. Since the discovery of AD, research in the field has led to a number of proposed theories behind the causes of AD including the (i) cholinergic hypothesis (ii) amyloid beta hypothesis and (iii) oxidative stress hypothesis. The major class of drug therapies are cholinesterase inhibitors; however, this “one drug, one target” approach has proved to be ineffective during the later stages of disease progression. Here we examined two novel classes of tricyclics; phenothiazines (5, 6, 7a-l) and phenoselenazines (13, 14, 15a-l) to target the cholinesterases (ChE), amyloid aggregation, and oxidative stress pathways of AD. This new design approach is aimed at discovering potential disease-modifying therapeutics with multi-targeting abilities. Chapter 1 encompasses background information pertaining to the role of each hypothesis in AD including the cholinesterase, amyloid and oxidative stress hypothesis. Chapter 2 provides a summary of the design and hypothesis behind the project. Chapter 3 describes the chemistry conducted including the chemical protocols, reaction schemes and mechanisms in synthesizing the target molecules. Chapter 4 reviews the biological evaluation and the SAR analysis of the synthesized compounds. Furthermore, it describes the principles behind the biological assays conducted including cholinesterase inhibition, amyloid aggregation inhibition, antioxidant properties and cell viability in neuroblastoma cell lines. Chapter 5 consists of the molecular modeling results and their application to help rationalize the results in both the cholinesterase and amyloid aggregation SAR data. Chapter 6 reviews all the data acquired and iv provides ideas for future directions. Finally chapter 7 provides the full experimental details for synthetic chemistry as well as the analytical data for synthesized compounds and protocols for biological evaluations. The research project conducted identified novel tricyclics as dual cholinesterase inhibitors with multi-target abilities in anti-amyloid aggregation inhibition and antioxidant properties. The most potent AChE inhibitor was 15d ((4-methoxyphenyl)-10H-phenoselenazin-10-ylmethanone; AChE IC50 = 4.63 μM), whereas the most potent BuChE inhibitor was 13 (10H-phenoselenazine; BuChE IC50 = 3.00 μM). Overall the best dual cholinesterase derivative was identified as compound 15j (2-chloro-10H-phenoselenazin-10-yl(4-methoxyphenyl)methanone; AChE IC50 = 5.79 μM, BuChE IC50 = 4.91 μM). Both PTZ and PSZ derivatives exhibited good antioxidant properties with weak anti-aggregation activity. In conclusion, our studies provide a new class of tricyclics in the design and development of small molecules to target multiple pathways of AD.