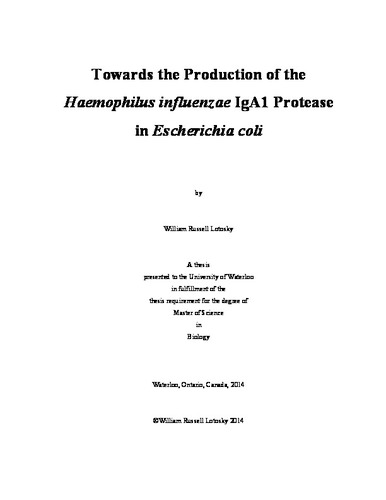 H. influenzae is a gram-negative bacterium colonizing the human respiratory tract and is responsible for hundreds of thousands of deaths annually. To aid in persistence and infection in its human host H. influenzae produces many secreted virulence factors including an IgA1 protease (IgAP). This enzyme selectively cleaves human and great ape IgA1 in its proline, serine and threonine rich flexible hinge region. This enzyme is a type Va autransporter protein and shares significant structural homology to the serine protease autotransporters of the Enterobacteriaciae. The objective of this thesis is to determine a method for the large scale expression of IgAP to allow for biochemical characterization and aid in understanding its role in infection and potential as a therapeutic for IgA nephropathy. This thesis presents three strategies for the attempted production of this enzyme in Escherichia coli, which is complicated by the inability of the protein to tolerate a methionine residue at the N-terminus. Native synthesis of the protein results in an alanine at the N- terminus caused by cleavage of the signal peptide during export to the periplasm. First the gene was cloned into the pBAD vector in frame with a viral signal peptide to target expression to the periplasm and produce a native N-terminus. Expression of IgAP in a simple pET vector was attempted, relying on the native methionine amino peptidase activity of E. coli. to cleave the N-terminal methionine. Finally, a mutant form of the enzyme lacking any methionine residues was expressed into insoluble inclusion bodies, purified and after denaturation with guanidine-HCl, the N-terminal methionine was cleaved with CNBr. Through these studies we present several methods for the production of proteins in E. coli particularly applicable to proteins that will not tolerate a methionine at the N-terminus. The methods presented were insufficient to produce an amount of soluble, active IgAP as detectable by SDS-PAGE and cleavage of the IgA1 heavy chain.

William Lotosky (2014). Towards the Production of the Haemophilus influenzae IgA1 protease in Escherichia coli. UWSpace. http://hdl.handle.net/10012/8986