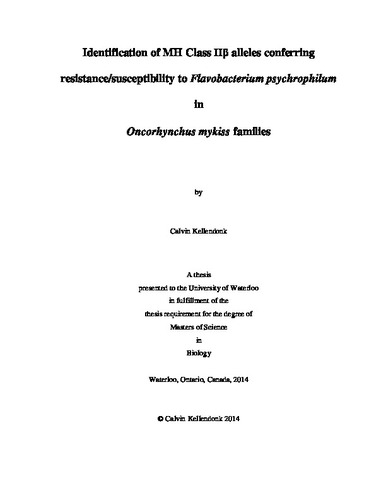 Flavobacterium psychrophilum is the causative agent of bacterial cold water disease (BCWD), which is a major concern for aquaculture and fish health, with mortality rates of 20-30%. Without a commercially approved vaccine, alternative methods of control are needed. One method involves selective breeding to produce fish with a higher natural level of resistance to BCWD. Major histocompatibility (MH) genes encode cellular receptors involved in antigen presentation and play an important role in adaptive immunity. MH genes are highly polymorphic and previous research has identified specific alleles of class I and class II that are associated with resistance/susceptibility to infectious salmon anemia virus (ISAv) as well as Aeromonas salmonicida in Atlantic salmon. This study examines the MH class IIβ genotype of six rainbow trout families infected with a pathogenic strain of F. psychrophilum and survival status to identify alleles associated with better or worse performance. In the survival analysis hazard ratios were calculated for each allele and genotype. None of the obtained alleles or genotypes demonstrated statistically significant hazard ratios. If MH class IIβ alleles did confer resistance/susceptibility to BCWD this would be valuable information for aquaculture businesses that want to use selective breeding to produce fish stocks with a reduced chance of succumbing to BCWD. However no statistically significant relationship between alleles or genotypes and resistance to BCWD was observed.