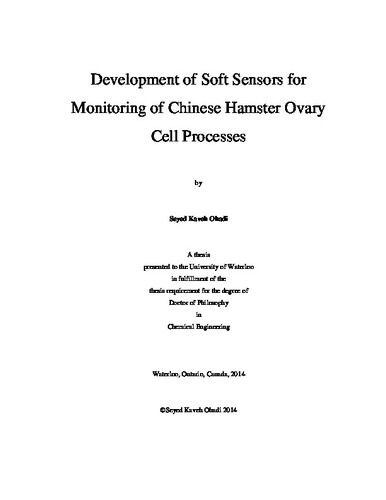 The goal of this work was to develop monitoring techniques for use during the production of monoclonal antibodies (Mabs) in Chinese hamster ovary cell cultures. Such monitoring would enable real-time screening and control of key process variables both upstream and downstream so as to guarantee product quality and process consistency. The measurement techniques that are currently available are time and labor intensive and in some cases require frequent maintenance. Thus, they are not suitable for fast online monitoring of bioprocesses. Thus, with a goal of future real-time implementation, data-driven (empirical models) and model-driven (mechanistic models) soft sensors were developed. The bioreactor is the key component of the upstream manufacturing phase. Continuous monitoring and control of this unit is critical in order to maximize production of the Mab with a desired quality (i.e. glycosylation pattern). Data-driven soft sensors were developed using intrinsic multi-wavelength fluorescence spectra of the culture broth in combination with partial least square regression (PLSR) for tracking viable cell, dead cell, recombinant protein, glucose, and ammonia concentrations. To better elucidate the relationship between the fluorescence spectra and process operating conditions, trajectories of fluorophore-peaks over the course of the culture were investigated and compared to changes in key process variables prior to model development. The proposed soft sensors were capable of predicting the aforementioned process variables with high accuracy. To enhance the extrapolation accuracy of the data-driven soft sensor outside of the region of operating conditions used for model calibration and to better track the dynamics of the culture, an extended Kalman filter (EKF) was developed based on a combination of mechanistic and empirical models. To address the structural and parameter uncertainty of the models, non-stationary disturbances were introduced to the model through parameter adaptation. The resulting EKF-based soft sensor’s predictions surpassed the accuracy of a standalone fluorescence based soft sensor and was capable of tracking process dynamics in between sampling instances with high precision. N-linked glycosylation has a significant impact on the therapeutic properties of Mab and is an important quality attribute that is associated with the extracellular metabolic state of the culture. Based on the primary investigation it was revealed that the fluorescence spectroscopy is not capable of accurately tracking the glycosylation profile of the Mab. Thus, to enhance the controllability of the glycoprofile, a novel dynamic model was developed that relates the extracellular culture conditions to the accumulated glycosylation pattern of Mab produced through the production of nucleotide sugars required for N-linked glycosylation in the Golgi apparatus. The model parameters were estimated using the experimental data. The resulting model was capable of accurately predicting the glycosylation extent in the form of a galactosylation index as well as individual glycan structures. Another area of application of fluorescence was for monitoring protein aggregation. During downstream processing proteins are exposed to stress factors such as changes in temperature, pH, or shear stress that can increase the propensity of Mab to aggregate. Aggregation can trigger undesirable impacts including an increased immunogenicity response in the patient. Therefore, developing an in situ technique for fast quality and quantity control of protein aggregation is of great industrial interest. Fluorescence-based soft sensors, in conjugation with PLSR, were developed for quality control (product classification) and for quantitative monitoring (Mab monomer concentration) at different process conditions that typically occur in different stages of the purification process. To better elucidate the impact of stress factors on the degree of aggregation and identify the operating conditions for which the propensity to aggregate is minimal, a surface response model was fitted to the data prior to soft sensor development. The soft sensors were capable of accurately predicting monomer concentration of samples exposed to different levels of stress factors as well as for classifying the final product into different groupings according to their relative aggregation levels.