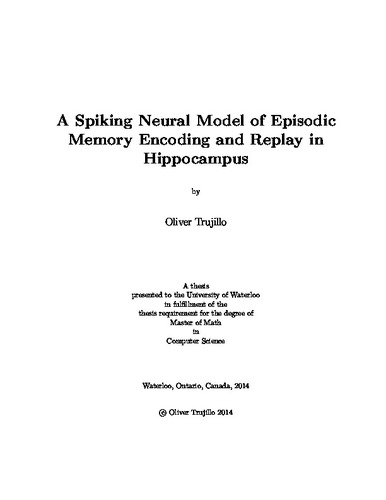 As we experience life, we are constantly creating new memories, and the hippocampus plays an important role in the formation and recall of these episodic memories. This thesis begins by describing the neural mechanisms that make the hippocampus ideally suited for memory formation, consolidation and recall. We then describe a biologically plausible spiking-neuron model of the hippocampus' role in episodic memory. The model includes a mechanism for generating temporal indexing vectors, for associating these indices with experience vectors to form episodes, and for replaying the original experience vectors in sequence when prompted. The model also associates these episodes with context vectors using synaptic plasticity, such that it is able to retrieve an episodic memory associated with a given context and replay it, even after long periods of time. We demonstrate the model's ability to experience sequences of sensory information in the form of semantic pointer vectors and replay the same sequences later, comparing the results to experimental data. In particular, the model runs a T-maze experiment in which a simulated rat is forced to choose between left or right at a decision point, during which the neural ring patterns of the model's place cells closely match those found in real rats performing the same task. We demonstrate that the model is robust to both spatial and non-spatial data, since the vector representation of the input data remains the same in either case. To our knowledge, this is the rst spiking neural hippocampal model that can encode and recall sequences of both spatial and non-spatial data, while exhibiting temporal and spatial selectivity at a neural level.