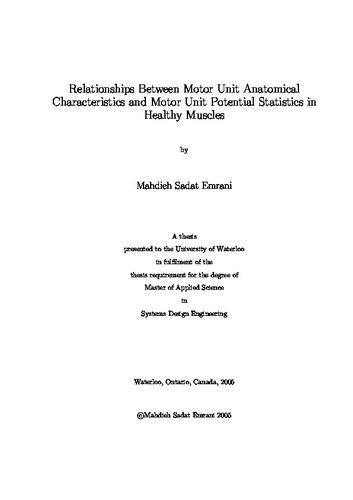 The main goal of this thesis was to discover the relationships between MU characteristics and MUP features. To reach this goal, several features explaining the anatomical structure of the muscle were introduced. Additionally, features representing specific properties of the EMG signal detected from that muscle, were defined. Since information regarding the underlying anatomy was not available from real data, a physiologically based muscle model was used to extract the required features. This muscle model stands out from others, by providing similar acquisition schemes as the ones utilized by physicians in real clinical settings and by modelling the interactions among different volume conductor factors and the collection of MUs in the muscle in a realistic way. Having the features ready, several relationship discovery techniques were used, to reveal relationships between MU features and MUP features. To interpret the results obtained from the correlation analysis and pattern discovery techniques properly, several algorithms and new statistics were defined. The results obtained from correlation analysis and pattern discovery technique were similar to each other, and suggested that to maximize the inter-relationships between MUP features and MU features, MUPs could be filtered based on their slope values, specifically MUPs with slopes lower than 0. 6 v/s could be excluded. Additionally PDT results showed that high slope MUPs were not as informative about the underlying MU and could be excluded to maximize the relationships between MUP features and MU characteristics. Certain MUP features were determined to be highly related to certain MU characteristics. MUP <em>area</em> and <em>duration</em> were shown to be the best representative feature for the MU size and <em>average fiber density</em>, respectively. For the distribution of fiber diameter in the MU, <em>duration</em> and <em>number of turns</em> were determined to reflect <em>mean fiber diameter</em> and <em>stdv of fiber diameter</em> the best, correspondingly.