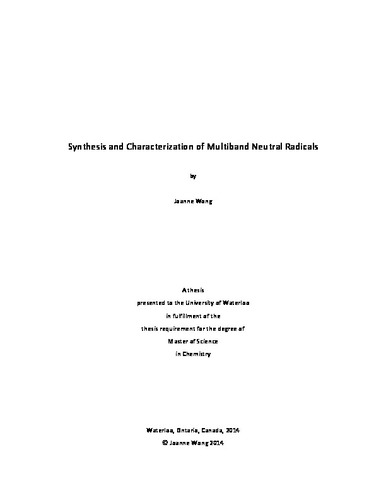 The notion that an array of free radicals might behave like metallic sodium was first suggested by McCoy and Moore in 1911. While the hypothesis represents an important historical landmark, there are many synthetic challenges associated with designing a conductive radical, such as the high propensity for these materials to dimerize and thus quench the free spin. Considerable advances have been made to overcome spin-pairing, including incorporation of heteroatoms such as sulfur and nitrogen atoms. Over the last 20 years, the Oakley group has used thiazyl radicals as a building block for multifunctional materials. While the early frameworks possessed a high barrier to charge transport, U, trapping the materials in Mott insulating states, the development of resonance-stabilized oxobenzene-bridged bisdithiazolyl radicals has led to a significant decrease in U, and metallic conductivity under mild pressure have also been observed. The focus of this thesis is on the design, synthesis, and characterization of new oxobenzene-bridged radicals, and the effects of pressure on these systems. One particularly interesting system is the prototypal-oxobenzene-bridged radical, in which compression from 0 – 13 GPa afforded two additional phases and a significant increase in conductivity, peaking at 2 S cm-1 at 6 GPa with a concomitant decrease in Eact to zero, consistent with formation of a metallic state. Density functional theory (DFT) calculations were used to probe the electronic structure of these oxobenzene-bridged radicals, and these revealed the multiband electronic structure which is the source of the superior physical properties of these materials compared to previous generations of thiazyl radicals. The intrinsically low U values and diverse structural variety exhibited by these oxobenzene-bridged radicals prompted the study of other substituents at the basal site. Studies on the early monocyclic DTDA systems were explored in pursuit of structure-directing ligands which can alter the solid-state packing to improve the bandwidth W. To this end, a pyridyl moiety was incorporated onto the DTDA framework, in which molecular ribbons laced together laterally by S---N intermolecular contacts was observed. However, these radicals crystallize as diamagnetic dimers, and are insulators. Nevertheless, it was established that nitrogen can be used as a structure directing ligand. Consequently, incorporation of a pyridine-quinone core into the oxobenzene-bridged framework was pursued in hopes of generating a more tightly bound structure with improved bandwidth, W. While the synthesis of the radical was not achieved, a variety of new synthetic procedures and novel species were developed. The last and most recent work involves the incorporation of a π-acceptor (i.e. NO2) at the basal site of the oxobenzene-bridged framework, and the resulting material displays the lowest Ecell (U) = 0.45 V ever observed for a neutral radical. While this is still ongoing work, preliminary results on the synthesis, crystallography, magnetic and conductive properties are presented. To date, two different solvated phases have been isolated (incorporating acetonitrile and proponitrile) and both have been characterized by single X-ray crystallography. Both phases show room temperature conductivities near 10-2 S cm-1.