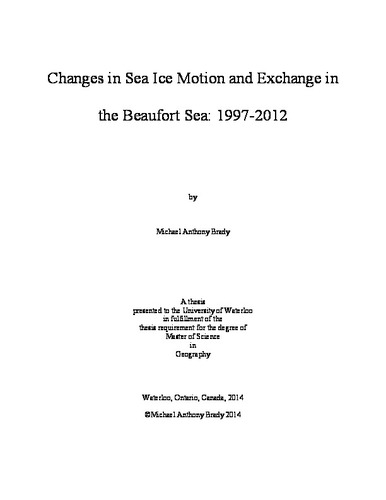 Sea ice motion and area exchange are investigated within the Beaufort Sea to examine the effects of a diminishing sea ice cover on the dynamics in the region. Monthly sea ice motion estimates are produced by applying a pre-existing ice-tracking approach on sequential overlapping RADARSAT image pairs. Mean July-October sea ice drift over the 1997-2012 time series is estimated to be 4.78 km day-1 (±3.30 km day-1). A significant positive trend of 0.07 km day-1 month-1 is shown for the same period, representing a 1.5% month-1 linear increase in ice drift speeds over the 16-year time series. Ice motion results show a consistent positive bias ranging from 0.63 km day-1 to 2.02 km day-1 in ice drift speeds when compared with 4 independent datasets. Estimates of ice area exchange are calculated for 3 thresholds over the same 16-year period; the results of which reveal that in recent years (2008-2012), westward sea ice area export towards the Chukchi Sea has dramatically decreased to be relatively negligible when compared to exports during 1997-2007. Investigating the root causes of these changes in ice motion and exchange reveal that despite few changes in the overall sea ice circulation pattern in the Beaufort Sea, changes in melt processes brought about by increases in surface temperatures and solar radiation absorption in addition to declines in sea ice concentration, age and thickness are instrumental in changing the Beaufort Sea from being known as a region for sea ice to thicken and mature to a region where sea ice has little chance of surviving summer melt.