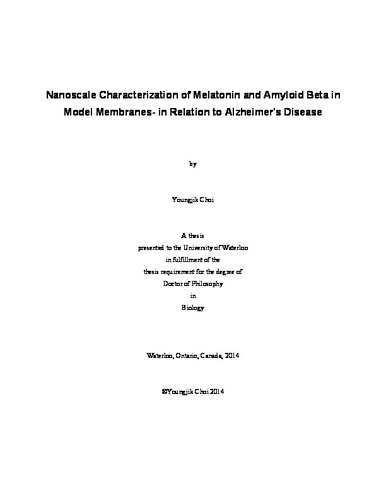 Increasing evidence suggests that cell membranes play an important role in the pathophysiology of Alzheimer's disease (AD). Direct interaction of small molecules, such as cholesterol and melatonin, with cellular membrane can alter the physical structure of the membrane lipid bilayer, which can affect the interaction of membrane with amyloid-β (Aβ) peptides that are implicated as one of the main culprits of the disease. The hormone melatonin has been shown to decrease the toxic effects of Aβ peptides. Evidence suggests that melatonin may interact with lipid membranes non-specifically in exerting its protective effects. The goal of the project was to measure the non-specific membrane interaction of melatonin (and contrast it to cholesterol) and also to characterize how the membrane's action affects Aβ peptide's interaction with and accumulation on the membrane. First, Langmuir monolayers were used to study the effects of melatonin. The results show that melatonin acts on the monolayer membrane model in ways that reduce or counter the effects of cholesterol. Contrary to condensing and thickening effect of cholesterol, melatonin showed thinning and fluidizing effects. It was also discovered that melatonin's precursor molecules, which have also been shown to have protective effects in AD, also exert similar effects in the membrane as melatonin. The action on the membrane of melatonin and its effects on Aβ binding to the membrane were studied using atomic force microscopy and breakthrough force spectroscopy on supported bilayer membrane models. Protocols and methods for producing good quality supported bilayers, obtaining control breakthrough force spectroscopy data, and imaging of viAβ binding to the membrane were successfully developed and performed. However, conclusively showing the effects melatonin's membrane action and on binding and accumulation of Aβ on the membrane using AFM will require further investigation. In conclusion, the work confirmed and characterized the membrane action of melatonin and its related molecules, however, it was not possible to show how it affected the Aβ peptide accumulation in the membrane. The results indicated that the direct membrane interaction of molecules may have significant effects on the biophysical properties of the membrane, but verifying the impact of the effects will require further work. The results of this work added new important discoveries in the field of membrane biophysics, and the techniques, methods, and protocols developed throughout the work further contributed to the field by fostering future work.