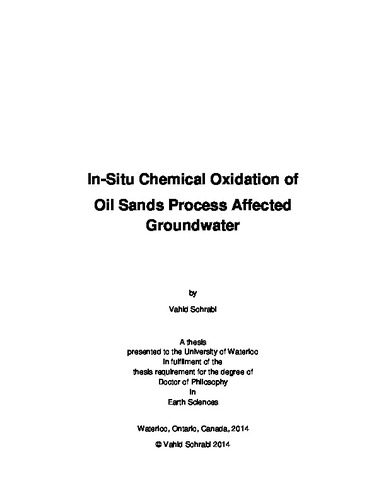 Development of oil sands mining in Athabasca basin, NE Alberta has resulted in generation of more than 1 × 109 m3 of oil sands process-affected water (OSPW) mixed with fine tailings and currently stored in about 182 km2 of tailings ponds. The OSPW has displayed acute toxicity to aquatic organisms due to the presence of a group of acid-extractable organics (AEOs), including aliphatic and cyclo-aliphatic carboxylic acids, termed naphthenic acids (NAs). Although slow aerobic degradation/aging processes in the tailings ponds reduces the toxicity of OSPW, AEOs in the oil sands process-affected groundwater (OSPGW) infiltrating into underlying sandy aquifers remain acutely toxic for decades. Subsequent transport of OSPGW towards surface water is one of the critical consequences of the on-site tailings storage. The main objective of this research was to investigate the potential for in situ chemical oxidation (ISCO) to mitigate toxicity of OSPGW. In order for effective application of ISCO of OSPGW three requirements must be met: 1) the oxidant must react with AEOs, 2) the ineffective oxidant consumption by aquifer components must be small, and 3) intimate contact between the injected oxidant and the AEOs in the aquifer within the time when the oxidant remains effective. Permanganate and un-activated persulfate were applied in this research. A series of batch treatability testing were conducted on a variety of OSPW/OSPGW at temperatures ranging from 22 ˚C to 5 ˚C. The initial set of treatability experiments employed OSPW to evaluate the potential for oxidation of AEOs at 22 ˚C. Both permanganate and un-activated persulfate were able to degrade AEOs present in OSPW. Permanganate oxidation occurred mostly via molecular transformation with some residual dissolved organic carbon (DOC), whereas persulfate mineralized the AEO compounds. Characterization of oxidized samples revealed that permanganate degraded high Z number acids preferentially while persulfate initially reacted with smaller acids. The AEOs from oxidized OSPW showed essentially no Microtox toxicity. The main goal of the next set of batch treatability experiments was to evaluate degradation of AEOs present in OSPGW, the potential in situ treatment target, at 22 ˚C. Again, both permanganate and persulfate effectively oxidized AEOs present in OSPGW and rendered the AEOs non-toxic, as judged by embryo-larval fathead minnow bioassays. Consistent with previous treatability experiments on OSPW, oxidation/detoxification of OSPGW by permanganate mostly occurred by molecule structural transformations while persulfate oxidation mineralized most AEOs. Interpretation of embryo-larval fathead minnow bioassay along with sample characterization by advanced mass spectrometry suggested that high Z number naphthenic acids have the greatest toxicity. As permanganate degrades higher Z number acids it quickly reduces the toxicity. It was also found that a decrease in carboxylic acid concentration, measured by FTIR, does not necessarily result in decreased toxicity. Both permanganate and persulfate were able to degrade AEOs in OSPW and OSPGW at 22 ˚C. A series of batch test were conducted to investigate the capability of permanganate and persulfate to oxidize AEOs in OSPGW at the local aquifer temperature, 5 ˚C. At 5 ˚C, only permanganate oxidation reduced the toxicity of OSPGW. Persulfate was ineffective due to its limited reactivity with the more toxic AEOs. Neither permanganate nor persulfate showed any level of AEO mineralization, suggesting that oxidation mechanisms were temperature dependent. Similar to oxidation at 22 ˚C, toxicity mitigation was connected to degradation of high Z number acids by permanganate. This re-emphasizes that decrease in carboxylic acid concentration, measured by FTIR, does not necessarily reflect reduction of toxicity of OSPW/OSPGW. So, in order to ensure that any treatment results in the required mitigation in toxicity of AEOs, application of advanced AEO characterization in support of sensitive toxicity testing, such as with Pimephales promelas, is required. A series of stop-flow column tests were conducted to mimic in situ oxidation of AEOs either using permanganate or persulfate at 5 ˚C in the presence of aquifer sediment. Permanganate degraded the toxic fraction of OSPGW in aquifer sediment at the local aquifer temperature of 5 ˚C. While aquifer material appears to activate persulfate resulting in higher rates of carboxylic acid degradation, it did not mitigate the acute toxicity of OSPGW. Natural oxidant demand/interaction batch tests determined permanganate and persulfate consumption by non-target aquifer material at 22 and 5 ˚C was low. This suggests considerable dispersive mixing of oxidant with large volumes of acutely toxic OSPGW will occur while the oxidants are active. Batch oxidation tests with OSPGW at 22 and 5 ˚C revealed that permanganate degraded the significant AEO/NA fraction at concentrations at least as low as 0.1 g L-1. On the other hand, persulfate was not effective at 5 ˚C or at 15 ˚C even at concentrations as high as 10 g L-1. This implies that contact between OSPGW and low concentrations of permanganate would still be effective after considerable dispersive dilution and some consumption by interaction with aquifer materials. A series of simple simulations estimated that about 164000 m3of a representative aquifer could be infused with at least 0.1 g L-1 KMnO4 following injection of 9000 M3 of a 5 g L-1 KMnO4 solution. As an approximation, KMnO4 was assigned no oxidant demand by the aquifer materials. The cost of oxidant was estimated to be $1.6 per m3 of aquifer treated or $6.4 per m3 of OSPGW treated, although overall project costs are likely 4- or 5-fold higher. The low oxidant demand of aquifers such as the WCSC and the capability of permanganate to remove sufficient acute toxicity when less than 50% of the AEOs are oxidized, makes ISCO using permanganate a promising technology to mitigate the acute aquatic toxicity of AEOs (or NAs) in OSPGW. A pilot-scale permanganate injection trial in an aquifer impacted by OSPGW should be preformed to confirm permanganate ISCO efficacy and to optimize operations. A more comprehensive evaluation of physical and geochemical changes in the aquifer (permeability reduction due to MnO2 precipitation, TDS increase, pH change, metal mobilization, etc.) should also be a priority.