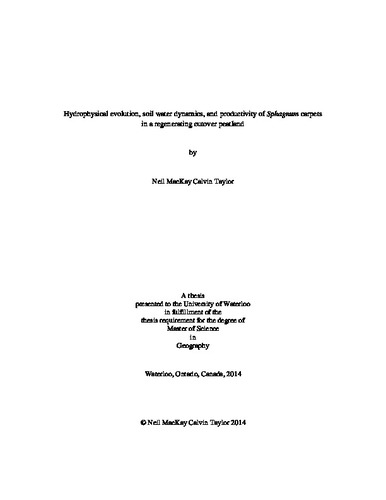 The physical and hydrologic characteristics of cutover peatlands often inhibit the regeneration of typical peatland vegetation, particularly the keystone peat-forming genus <i>Sphagnum</i>, in the absence of active rehabilitation measures. Peatland restoration and rehabilitation techniques developed over the past two decades focus on the establishment of a <i>Sphagnum</i> carpet on cutover surfaces, largely through amelioration of hydrologic conditions. More recently there has also been increased interest in the use of cutover peatlands as sites for producing <i>Sphagnum</i> biomass commercially on a renewable basis, as this can be substituted for the slightly decomposed peat currently used in the production of horticultural growing substrates. As a result, there is interest in better understanding the soil water dynamics and hydrologic controls on productivity in regenerating <i>Sphagnum</i>-dominated cutover peatlands, which differ in many regards from natural peatlands. The purpose of this thesis is to describe the structural evolution, hydraulic properties, and productivity dynamics of <i>Sphagnum</i> layers regenerating on cutover peat surfaces, ranging from 3-43 years in age. This has applications to <i>Sphagnum</i> biomass production as well as to understanding the longer-term trajectory of restored cutover peatlands. The Shippagan peatland, a block-cut cutover peatland located in northeastern New Brunswick, has been the site of investigations into <i>Sphagnum</i> biomass production on cleared cutover surfaces since 2004. Extensive spontaneous regeneration of <i>Sphagnum</i> has also occurred across much of the site outside the experimental areas. For this study, plots were established in seven areas of the site where regeneration began at different times. The hydrology (water table depth, distribution of soil moisture, evaporation, precipitation input) of each plot was monitored over the study season (May 24 to August 13, 2013) and gross ecosystem productivity measured frequently using chamber techniques. Following the study season, multiple vertical profiles were extracted from each plot for laboratory determination of the hydrophysical properties (bulk density, porosity, saturated hydraulic conductivity, soil moisture characteristic, unsaturated hydraulic conductivity–pressure relation) of the regenerated layers and underlying cutover peat. The regenerated layers follow a pattern of evolution whereby the bulk density and retention capacity of the base of the profile (the ~5 cm thick layer directly overlying the cutover peat) increase with age as a result of decomposition and compaction. While the amount of water that can be held against tension within the profile appears to increase with the age of the regenerated layer, there is a general trend towards decreasing near-surface (0-3 cm depth) water content for a given depth of water table as the thickness of the regenerated layer increases. Near-surface water content is strongly correlated (p<0.05; Pearson’s Correlation Coefficient, two-tailed test of significance) with water table position at all plots, while canopy retention of precipitation is poor, suggesting the predominance of groundwater as a water source. The water table position remains above the former cutover peat surface for a substantial amount of the growing season (81±8% of study) at the >40 year old plots but not at the <10 year old plots (30±25% of study). This suggests that seasonal water table position may have increased over time relative to initial post-extraction conditions in the spontaneously regenerated areas as a result of the hydrophysical evolution of the profile. The hydrologic regime in these areas may be becoming more similar to that of a natural peatland, where water table fluctuations are confined entirely to the acrotelm. Productivity measurements indicate a broad tolerance within all study plots to observed environmental conditions, and in particular that insufficient supply of water does not limit productivity at the site even when the water table is >40 cm below the surface or when no direct precipitation is received for 16 days. Conversely, productivity may be frequently limited at the site by above-optimal water contents. Based on analysis of productivity response to changes in near-surface water content, a volumetric water content range of 0.13 to 0.50 is identified as optimal for growth. The spontaneously regenerated layers studied here appear to be on a trajectory of structural and hydrologic evolution favouring peat formation, which is encouraging for the long term prospects of restored cutover peatlands. The <i>Sphagnum</i> species studied are tolerant to at least moderate water table drawdowns, though they may be less tolerant to periods of especially high water table, and biomass production operations using these species should take this into consideration. The large predominance of capillarity as a water source, and the hydrologic connectivity between the regenerated layers and cutover peat, imply that control of subsurface water level is an effective means of optimizing hydrologic conditions for biomass production. This study is the first to specifically describe the ecohydrology and long term structural evolution of <i>Sphagnum</i> regenerating on cutover peat surfaces.