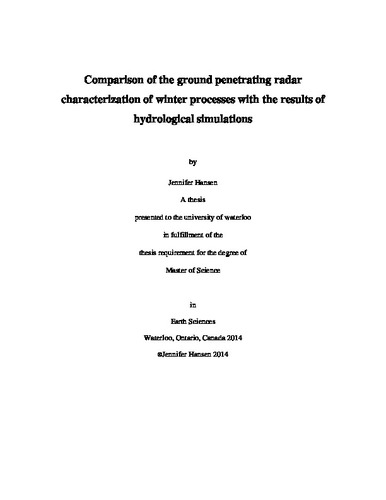 Ground penetrating radar (GPR) is a useful tool to characterize and investigate a variety of cold region processes, including but not limited to permafrost development and glacial morphology. Despite a comprehensive coverage, with respect to permafrost and glacial morphology investigations, few if any previous studies have captured the long term seasonal trends of freezing and thawing cycles. This work introduces a new method for monitoring freeze/thaw processes by demonstrating the capacity of GPR to characterize the dynamic changes of the frost front and also identify thawing events that occur near the surface throughout the winter season. This study incorporates two full winter seasons, October 2006 to April 2008 to capture the distinct freezing and thawing cycles that occur during these times. These winter seasons were surveyed by Steelman et al., (2012) and the data collected during their study is incorporated into this work. These surveys contain high resolution, 900 MHz surveys, consisting of common midpoint sounding (CMP) and reflection profiles. These high resolution reflection profiles precisely imaged the location of the frost front throughout the winter season to provide ‘real time’ data on the frozen state of the ground. CMP soundings collected by Steelman et al., (2012) also provide the ability to calculate accurate depth estimates of the interface between the frozen and unfrozen zone along with contributing electo-magnetic (EM) wave velocity estimates that indicate the relative quantity of unfrozen water in the ground. Oscillations in frost front depth were observed that correlated well with temperature trends, descending deeper in the soil column during colder periods and retreating during warmer periods of the winter season. Moreover, near surface and complete thaws were documented by the appearance of dispersive wave guides. This high resolution GPR data set from 2007-2008, provides a thorough description of the winter processes, which were constrained by comparison to an unsaturated heat transport flow model, HYDRUS 1-D. Using laboratory-derived hydraulic properties and industry accepted heat transport values along with limited parameter calibration, good agreement was achieved between the HYDRUS 1-D model results and the observed values. The weighted root mean square error (RMSE) is 0.07 m, showing the ability the HYDRUS 1-D model has to represent the field data and how on average there is little error between the observed GPR field data and predicted HYDRUS 1-D model results. Moreover the model captures the general oscillations and trends in the frost front which shows good predictability for the model. The HYDRUS 1-D model was validated using GPR data collected from the 2006-2007 survey year. Although this latter data set is somewhat less robust, the model is still able to capture the general frost movement trends and further demonstrate its ability to simulate GPR interpreted freeze/thaw dynamics.

Jennifer Hansen (2014). Comparison of the ground penetrating radar characterization of winter processes with the results of hydrological simulations. UWSpace. http://hdl.handle.net/10012/8951