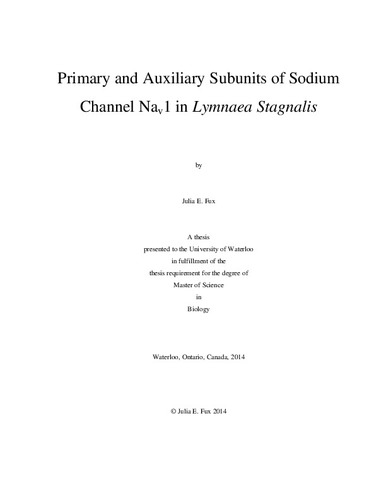 Voltage gated sodium channels (Nav ) are major contributors in the neuronal signal transduction, responsible for the action potential upstroke. They are members of the large 4x6 ion channel family, which also include the voltage gated calcium channels, and NALCN channels. The evolution of sodium selectivity in ion channels predates the development of the nervous system and sodium channels can be found in almost all animal lineages, including the most ancestral ones, like Placozoa and Apusozoa phylums. Two types of sodium channels, Nav1 and Nav2, are differentiated mainly based upon the structure of the inner pore, which dictates the ion selectivity of the channel. Nav1, which is represented in humans by 9 subtypes, Nav1.1-9, carries a selectivity filter motif DEKA which makes it highly selective for sodium ions. Nav2 which is ancestral to Nav1 has been lost in the vertebrate lineage but is found in the majority of invertebrates. Despite the structural homology with Nav1, the selectivity filter DEEA makes the Nav2 channel calcium selective. We have sequenced, cloned and identified splice variants in sodium channel Nav1 from a pulmonate fresh water snail, Lymnaea stagnalis. We also identified the sequence of the Lymnaea Nav2 channel, which is possibly expressed in the snail external sensory organs. Unlike the highly conserved α- subunits, the multifunctional auxiliary subunits of human sodium channel, β1-4, have no structural analogs among invertebrates, although insectal Tip-E and TEH have a similar function. We have identified putative molluscan sodium channel auxiliary subunits, LNavB1-4, which are secreted proteins with a conserved CUB domain, analogous to the CAM like immunoglobulin V-folds in mammalian β-subunits. CUB domains are found in auxiliary subunits of nematode and mammalian ligand gated channels, such as kainite receptors and acetylcholine receptors. Our hypothesis is that the Navβ subunits are an example of convergence, which evolved independently in different invertebrates and vertebrate groups to serve similar functions.