The Influence of Performance Measurement on Actor?s Perception of Task in Goal Oriented Systems 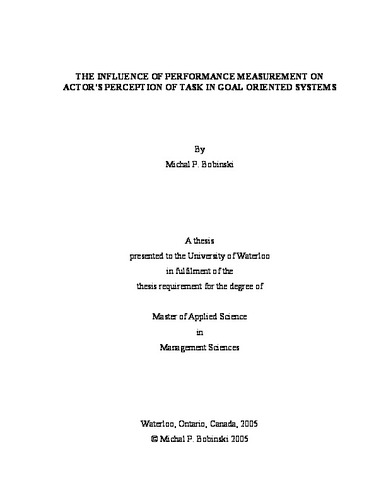 This thesis addresses the problem of the influence of a control system on the behaviour of an actor in a social or socio-technical system. In particular, the influence of a performance measurement mechanism on the behaviour of an actor and on the development of workarounds is being studied. <br /><br /> Current literature on those topics generally addresses only selected and rather obvious reasons for the existence of dysfunctional behaviour or the workarounds. However, no precise models of the cognitive processes or the explanation of the mechanisms, which govern this problem, are proposed in a satisfactory manner. In addition, most researchers have focused only on the system?s point of view of the task, paying less attention to the actors? perception of that task. Furthermore, the existing body of work mainly uses a case study format to explain the phenomenon or to validate the proposed solutions and theories. <br /><br /> In this thesis, the problem of the influence control system on the behaviour of the actor is framed in terms of four major concepts: (1) the concept of complexity of the task not being fully captured by the performance measurement mechanism; (2) the concept of an actor perceiving that extra complexity is not being captured by the system and thus choosing alternate paths other than the system-prescribed path; (3) the concept of a network of valence forces associated with alternate paths; and finally, (4) the concept of similarity judgment between the alternative paths and the system-prescribed path based on the actor?s model of the control system?s point of view. <br /><br /> This thesis develops the theoretical framework for analyzing and understanding the issues of dysfunctional behaviour and workarounds. It also presents an empirical experimental study in support of the theoretical discussion and the hypothesis. The experiment examines subjects? rating of quality, defined as a degree of similarity to a target object, of several objects on a page under various performance measurement conditions. The stimulus used for experiment was made up of two dimensional quadrangle figures, including rectangle, parallelograms and trapezes, in various shades of red colour.