Learning to cooperate: The impact of executive functioning, theory of mind and externalizing behaviours on children’s social functioning 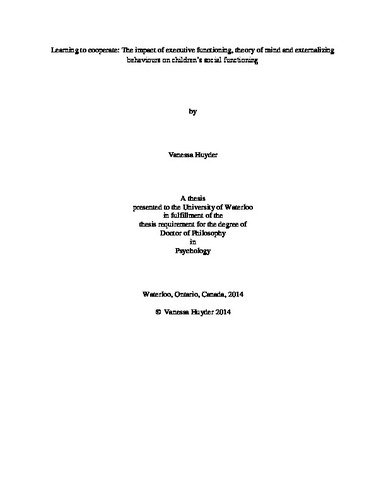 Developing the ability to interact in a socially competent manner (i.e., in which one’s own needs and goals are met and the needs and goals of others are considered) is a complex process that is likely influenced by one’s cognitive skills, as well as other individual characteristics. This dissertation sought to examine the unique contributions of children’s executive functioning, theory of mind and verbal skills on their socially appropriate behaviours and how these relationships change at different ages. The interaction effect of executive functions and symptoms of Attention-Deficit/Hyperactivity Disorder (ADHD) and Oppositional Defiant Disorder/Conduct Disorder (ODD/CD) on social behaviour, while controlling for the other symptoms profile, was also investigated. Younger (5-8 years old) and older (9-12 years old) children’s everyday social skills and symptoms of ADHD and ODD/CD were assessed using parent-report questionnaires. Children completed tasks to assess their executive functioning (i.e., inhibitory control, working memory, and planning skills), theory of mind, and verbal skills, and participated in an interactive dyadic cooperative task to assess their social behaviours with peers. Because children participated in pairs, dyadic data analysis was used to examine the effect of individual characteristics on children’s own and their partners’ social behaviours. Results indicated that theory of mind was related to younger children’s, and their partners’, social skill; however, planning, theory of mind, and verbal skills were related to older children’s and/or their partners’ social behaviours. Furthermore, executive functions interacted with symptoms of ADHD to affect older children’s, and their partners’, social skills, even when controlling for symptoms of ODD/CD. These findings suggest that children utilize different cognitive skills at various developmental stages in order to guide their social behaviours. In addition, executive functions appear to moderate the effect of symptoms of ADHD on children’s and their partners’ socially competent behaviours. Findings have implications for theories of children’s social development, as well as for intervention strategies aimed at enhancing the social skills of youth.