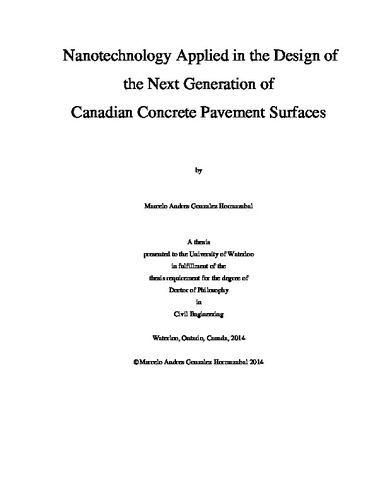 High friction response in pavement improves road safety, while reduced noise production from the tire-pavement interface benefits public health and the economy of a country. According to Transport Canada, highway crashes cost Canadians approximately $67 billion annually. The economic impact of noise is difficult to quantify; however, billions of dollars have been invested in noise barriers as noise mitigation alternatives. Roadway safety is related to many factors including the friction characteristics or skid resistance of pavements. Lack of sufficient friction at the tire-pavement interface is a significant contributing factor to vehicle crashes. Skid resistance of pavement is affected by both: the microtexture of the pavement as related to the fine and coarse aggregate properties in the mortar phase of the concrete mixture; and by the macrotexture, which is defined as the measurable grooves formed in the plastic concrete during the finishing operation, or created in the hardened pavement with cutting heads consisting of uniformly spaced circular diamond saw blades. Traffic noise is also a growing concern for public health and the country’s economy. Tire-pavement noise predominates over the other sources of roadway noise in many circumstances. Under accelerating conditions, the tire-pavement noise is dominant at speeds greater than 35 to 45 km/h for cars, and 45 to 55 km/h for trucks. Although the tire-pavement noise is generated through a variety of mechanisms at the tire-pavement contact patch, it is recognized that a proper design of Portland cement concrete (PCC) pavement surface may assist in reducing noise levels and thus has prompted the evaluation of new macrotextures. However, an optimization process must be carried out to achieve adequate friction while reducing noise generation through macrotexture because large macrotexture can increase friction and generate excessive noise due to an inadequate tire-pavement interaction. Next Generation Concrete Surface (NGCS) is the first new concrete pavement texture introduced in the United States in the last 20 to 30 years. NGCS also has the quietest texture developed for conventional concrete pavements, mainly through macrotexture modification. The construction process uses conventional diamond grinding equipment, but the blades have a different configuration in the drum. Currently, after the evaluations of long term pavement performance and noise characteristics of the NGCS, concerns have been reported regarding durability and increased noise level over time. In this research, a laboratory investigation examined how friction, noise absorption, and surface durability can be improved by modifying the concrete microtexture. The innovative approach of this research involved investigating those properties of concrete pavement through microtexture modification using nanotechnology. Nanotechnology involves manipulating materials at scales below 100 nm. Two different products were investigated: nanosilica applied in the cement paste, and a nano lotus leaf solution applied as a coating to mimic the lotus leaf effect. Several concrete mixes were prepared and tested in the laboratory. Results reveal that microtexture modification through the addition of nanosilica can change the properties of fresh concrete, hardened concrete, and concrete durability. In fresh concrete, the main findings indicate that nanosilica reduces the concrete slump and also reduces the air content for a given water cement ratio; however, the slump and air content can be adjusted using High Range Water Reduced and Air Entraining Admixtures. In hardened concrete, results reveal that a small amount of nanosilica can accelerate the hydration process and enhance the compressive strength and the friction response. Results also reveal that nanosilica cannot significantly modify the sound absorption coefficient. Scanning Electron Microscope (SEM) images in hardened concrete provide insight into the impact that the nanosilica has on the Interfacial Transition Zone (ITZ). Nanosilica can reduce ettringite crystal formation in voids and can also produce a denser and a more compact cement paste. Regarding durability, several abrasion tests using the rotating cutter method indicate that nanosilica can enhance the concrete’s abrasion response, resulting in better wear resistance and durability of PCC road surfaces. Freezing and thawing, and scaling resistance results show that nanoconcrete is able to reduce the external damage on the PCC surface. Regarding the coating mimicking the lotus leaf effect, several concrete mixes were prepared and tested in the laboratory. Visual inspections demonstrate that it is possible to create the lotus leaf effect on concrete surfaces. Laboratory results reveal that the coating is able to maintain the friction response of concrete surfaces; however, results also reveal that the sound absorption coefficient is not significantly affected by the coating. Further research must be done to determine the coating impact on the hydroplaning effect when a heavy rainfall is present.

Marcelo Gonzalez (2014). Nanotechnology Applied in the Design of the Next Generation of Canadian Concrete Pavement Surfaces. UWSpace. http://hdl.handle.net/10012/8944