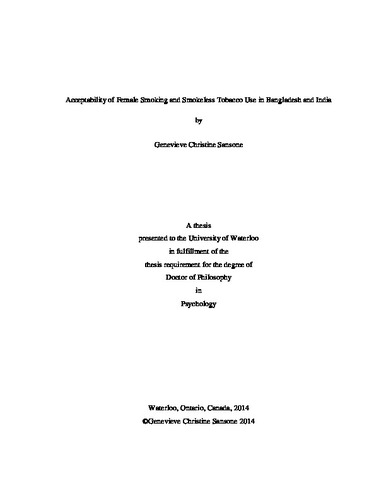 Background: Smokeless tobacco has a long history in Bangladesh and India, where it has become normalized as a socially acceptable behaviour, but the same level of social acceptance does not apply to smoking, especially among females. As a result, there is a large gender gap in smoking rates but the gender difference in smokeless tobacco use is much narrower or even in the opposite direction. Explanations for the higher prevalence and social acceptability of female smokeless tobacco use in this region range from cultural factors to tobacco industry practices and tobacco control policies. Objectives: This study aims to examine acceptability of female smoking and smokeless tobacco use in Bangladesh and India, and to identify factors that might distinguish female tobacco use from male tobacco use and influence behavior such as quitting, including different types of social norms (descriptive and injunctive), beliefs about tobacco, and awareness of tobacco control policies. Methods: Data are from the International Tobacco Control (ITC) Policy Evaluation Project in India and Bangladesh, longitudinal cohort surveys of tobacco users and non users conducted using face-to-face interviews. This dissertation uses data from Wave 1 of the TCP India Project (2010-2011; N=10,585) and Waves 2-3 of the ITC Bangladesh Project (2010, N=4,379; and 2011-2012, N=4,225). Respondents were categorized as either smokers (of cigarettes and/or bidis), smokeless tobacco users, mixed users (currently smoke and use smokeless tobacco), or non users of tobacco. The primary measures of interest for this study were behaviours relevant to quitting (quit intentions and quit attempts), perceived social acceptability of tobacco use in general and of female tobacco use in particular, awareness of selected tobacco control policies, and sociodemographics. Results: While rates of female tobacco use were low in each country, females were much more likely to use smokeless tobacco than to smoke, compared to males. In both countries, smokeless tobacco was perceived to be more acceptable than smoking, especially for females. Social acceptability measures were predicted by a few of the measures of awareness of tobacco control policies, including warning labels and smoke-free laws. The majority of respondents were aware that any form of tobacco use is harmful and is not an acceptable behaviour overall, indicating a negative injunctive norm; however, people who use either smoked or smokeless tobacco were more likely to say that their own product is socially acceptable, a sign of justification effects. This effect was strongest for female smokers – only 75-83% said it is not acceptable for females to smoke, compared to 93-97% of male smokers. The influence of descriptive norms on behaviour was seen from the finding that tobacco users were more likely to have friends and parents who shared the same habit. However, most tobacco users also said close others disapproved of their habit, creating a negative subjective norm that may be stronger for females. Very few tobacco users expressed a desire to quit, and a minority had made a quit attempt by Wave 3 in Bangladesh. Social acceptability predicted quit intentions only for smokers in Bangladesh: smokers who perceived greater society disapproval of smoking were more likely to intend to quit. Conclusions: Most research on smoking has focused on men and specifically on the harms of cigarettes; less attention has been paid to other tobacco products or the factors explaining their use, specifically for female tobacco users. It is important to study patterns of tobacco use among females in countries such as Bangladesh and India in order to reduce health risks and improve cessation rates for women who currently use smokeless tobacco, while at the same time preventing more women in these countries from taking up smoking. A better understanding of the ways that social norms influence tobacco use behaviour and quitting can have a valuable impact on designing and implementing more effective tobacco control strategies and health interventions in these countries and other LMICS.

Genevieve Sansone (2014). Acceptability of Female Smoking and Smokeless Tobacco Use in Bangladesh and India. UWSpace. http://hdl.handle.net/10012/8936