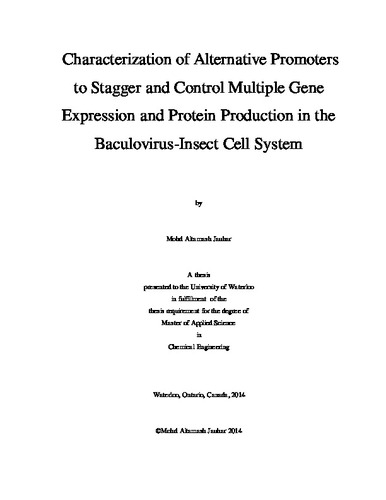 The baculovirus-insect cell system is one of the most widely used systems for recombinant protein production. The ease of handling insect cells and their ability to produce mammalian-like post-translational modifications, as well as improved methods for the quantification of baculovirus, have led to substantial progress in understanding the dynamics of protein production through the baculovirus expression vector system (BEVS). Furthermore, single baculoviruses can be engineered for expression from multiple genes guaranteeing expression of the different proteins within a single cell (for example Spodoptera frugiperda – Sf-9 cells). The main benefit of using a co-expression system is for products such as virus-like particles (VLPs) that can only be formed by producing two or more proteins within a single cell. There are some problems, however, associated with co-expression systems, such as the manipulation of expression levels for different proteins. In baculoviruses, genes are under the control of different promoters and these promoters are classified by the different times during which they “promote” expression. These can be classified into early promoters, late promoters and very late promoters. Researchers have traditionally used the strong and very late “polyhedrin” promoter for gene expression. Very late phase expression has several problems, such as allowing expression during a period where there is breakdown of the host machinery. Several proteins require extensive post-translational modification, such as glycosylation, or require secretion into the extracellular environment, both of which require the host cell machinery to be fully functional. Problems with glycosylation and secretion can be exacerbated by protein over-production. Simultaneous production of two different proteins in insect cells can also result in “competition” for cellular resources, which can cause lower amounts of each protein being produced compared to if these proteins were produced individually. The use of alternative promoters (polh, p10, vcath, basic, ie1, and gp64), which are active at different times post-infection, provides flexibility to control expression level and timing of “genes of interest”. iv In our work, Green Fluorescent Protein (GFP) and Red Fluorescent Protein (RFP) are being used to detect the expression of two proteins under the control of different promoters. Placing genes under the control of different promoters, allows for the control of mRNA levels in the cell and this can then lead to control of protein production levels. In our studies, RFP is always under the control of the polyhedrin promoter, while GFP is either under the control of the p10, basic, vcath, ie1 or gp64 promoters constituting five different polycistronic virus vectors; note that p10 and polh are very late and strong promoters; basic, vcath and gp64 are late promoters; and ie1 is an early and weak promoter. These combinations can lead to temporal separation of RFP and GFP production. The effect of different promoters on protein production is investigated. Flow cytometry is used for detection of fluorescent protein production by the cells after infection at different multiplicities of infection (MOIs). Tracking of intracellular mRNA levels of GFP and RFP are conducted with reverse transcription real time polymerase chain reaction. The 28S rRNA has been tracked and used as a housekeeping gene to ensure uniformity between samples.