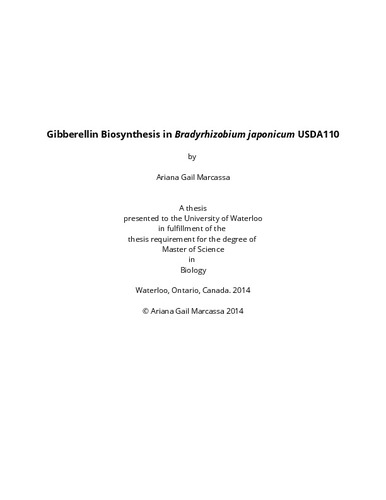 Biosynthesis of gibberellin (GA) by bacteria has been studied for nearly 50 years. Early on, bacterial culture extracts were analyzed for the presence of bioactive compounds, thought to be gibberellins. In the 1980s, advances in chromatography allowed specific detection of gibberellins by high performance liquid chromatography combined with gas chromatography and mass spectrophotometry. In the 1990s, the genes involved in bacterial gibberellin biosynthesis were identified for the first time in Bradyrhizobium japonicum USDA110. Until 2009, biochemical characterization of the associated gene products had not been completed; at that time, the substrate specificity of two terpene cyclases was worked out. Beginning in 2011, we started to work on determining the role of the remaining enzymes with unknown functions, specifically three cytochrome P450s and one short-chain dehydrogenase/reductase. In 2013 we began a multinational collaboration that resulted in determining the function of two of the cytochrome P450 proteins. More recently, we have probed the origin of the operon in bacteria and using comparative genomics gained insight for a possible biological role of bacterial gibberellin. At this time our hypotheses are untested, but we hope that continued collaboration with researchers around the world will enable us to collectively discover the role of bacterial gibberellin. This thesis is a collection of the methods, materials, and hypotheses crafted and tested over the past three years. I began my graduate studies by performing a literature review looking at early nodulation transcription control of gibberellin genes in rhizobia which can be found in chapter one. We found that expression of the operon was consistently upregulated during early-stage nodulation across different rhizobia. The second chapter details the methods I used to recombinantly express the Bradyrhizobium japonicum USDA110 gibberellin cytochrome P450 genes in Escherichia coli and the techniques I used to detect their biochemical activity while visiting a research lab at Iowa State University. The experiments to create deletion mutants of the cytochrome P450s in the gibberellin operon in three soil dwelling microbes: Bradyrhizobium japonicum USDA110, Sinorhizobium fredii NGR234, and Mesorhizobium loti MAFF303099 are also presented in chapter two. Chapter three summarizes our closer look at the sequences of gibberellin operons and details our hypothesis regarding the role of the genes in bacteria. The significance of this work stems from the creation of the B. japonicum USDA110 deletion mutant strains. Through a multinational collaboration, the strains were used to determine the role of their corresponding gene products in the synthesis of GA in this organism. Additionally, our survey of bacterial gibberellin biosynthesis operons in whole genome sequence data and primary literature has uncovered interesting clues to the biological role of gibberellin. We have developed hypotheses to explain why the gibberellin operon is found in certain bacterial microsymbionts of plants and what the biological role of bacterial gibberellin might be. Although this document is a good basis for research in bacterial gibberellin research, there is still much to learn and many questions to be answered.