Impacts of historical and projected climate changes on ice surfaces of the Tibbitt to Contwoyto Winter Road, Northwest Territories, Canada 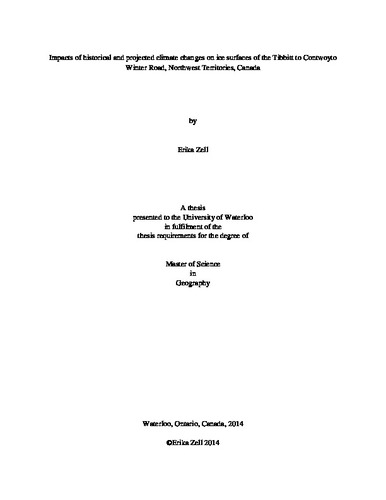 Seasonal ice and winter roads are a historically important part of the Canadian arctic transportation network. Constructed over frozen lakes, rivers, permafrost zones, and seasonally frozen ground, the roads service rural and aboriginal communities and resource extraction projects which are otherwise fly-in only for the rest of the year. The Tibbitt to Contwoyto Winter Road (TCWR) is one of the most economically significant and heavily used roads, running from outside of Yellowknife, Northwest Territories, to Contwoyto Lake, Nunavut, connecting three of Canada’s largest diamond mines, with a fourth project set to open on route by 2017. The TCWR has been constructed annually since 1982 as a joint venture between mine operators Diavik Diamond Mines Inc., BHB Billiton Diamonds Inc., and DeBeers Canada Inc., and requires a minimum ice thickness of 0.7 m to begin operations, with an average open season of 67 days. Current projections suggest an arctic amplification of the global climate warming signal, as well as changes to arctic precipitation patterns. Both have the potential to alter lake ice conditions, with economic impacts for the long-term viability of ice roads for moving mine supplies north via land. This thesis uses a one-dimensional thermodynamic lake ice model (Canadian Lake Ice Model – CLIMo), forced with atmospheric reanalysis data (ERA-Interim) to simulate historical ice conditions, as well as regional climate model outputs (Canadian Regional Climate Model – CRCM 4.2.0), to make near-future projections for ice phenology and thickness trends. Using road opening and closing dates provided by road managers, we model the historical variability in ice phenologies for the known operations period 1982-2011, as well as future conditions for the period 2041-2070 compared against a 1961-1990 baseline for a future climate scenario based on IPCC SRES scenario A2. Model runs suggest that climatic changes in the arctic, primarily warming surface air temperatures, could pose a threat to continued operations of the TCWR. A Mann-Kendall test is paired with the Sen’s Slope method for analysis on the historical data, finding that the ice cover season may have decreased by as much as 10 days between 1982 and 2011 (significant at the 0.05 level), and mean maximum ice thickness may have decreased by as much as 0.17 m over the same period (significant at the 0.05 level). CLIMo simulations for future climate scenarios project later ice-on dates by up to 11 days later in the calendar year, ice-off events occurring up to 14 days earlier in the spring, and a net decrease in the ice cover season by up to 25 days (after rounding), when computed as the difference between the 1961-1990 baseline and 2041-2070 future period. Mean maximum ice thickness is projected to decrease by up to 0.30 m over the same period. While winter ice cover is unlikely to disappear entirely in the near future, the number of days where the ice surface is consistently above the 0.7 m threshold for safe operations may decrease to the point where it no longer becomes economically feasible to build the road and transport materials via land.