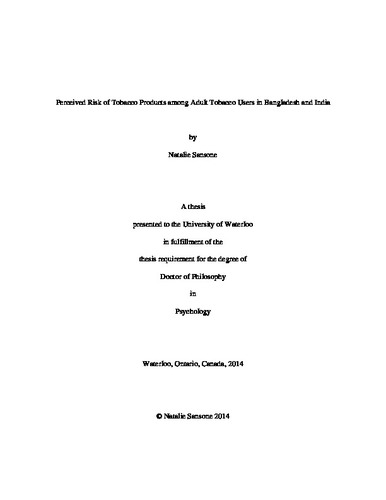 There is considerable evidence demonstrating that smokers underestimate or minimize their own perceived risk of harm from smoking, and that smokers’ perceptions of risk play a key role in their behaviour, notably quitting. However, the majority of this research has been conducted in high-income countries and on cigarette smokers only. Much less is known about the relationship between risk perceptions of tobacco products other than cigarettes and the influence of these beliefs on behaviour, such as maintaining tobacco use, switching products, or quitting. This is particularly important in countries like India and Bangladesh, where multiple tobacco products are prevalent and there are high rates of tobacco use, including some of the highest rates of smokeless tobacco use in the world. The main goals of this dissertation were to evaluate risk perceptions of three common tobacco products in India and Bangladesh (cigarettes, bidis, and smokeless tobacco), to compare risk perceptions across different types of tobacco users, and to determine the function of these risk perceptions in relation to behaviour. The data for this study was from the International Tobacco Control (ITC) Bangladesh and India Surveys, which are large, prospective cohort face-to-face surveys of adults. The Bangladesh Wave 1 (W1; 2009) Survey was conducted among a nationally representative sample of 3109 tobacco users and 2658 non-users, Wave 2 (W2; 2010) included 3108 users and 2554 non-users, and the Wave 3 sample consisted of 3275 tobacco users and 2247 non-users. The India Wave 1 Survey (2010-11) included 8051 tobacco users and 2534 non-users in four states. Respondents were asked a variety of measures of perceived risk, including perceptions of the harm of their product, perceptions of the health risks they face, and perceptions of the harmfulness of one product in comparison to another. Analyses on the data from these surveys suggested an optimistic bias among tobacco users in India and Bangladesh, both about their tobacco use in general and their specific tobacco product. Cross-sectional analyses revealed that the majority of tobacco users recognized the harms of tobacco use but underestimated the damage that would occur in the future, supporting previous evidence that tobacco users demonstrate an optimistic bias about the risks they face from their behaviour. In addition, this study found evidence of another type of optimistic bias that was present among the majority of tobacco users, which was underestimating the risk of their own tobacco product compared to others. While the majority of non-users and mixed users perceived different tobacco products to be no different in harm, the majority of users of a specific product perceived it to be less harmful than other products and less harmful compared to the perceptions of users of other products. Longitudinal findings from cigarette smokers at Wave 1 in Bangladesh who were recontacted at Wave 2 demonstrated that while cigarette smokers generally said bidis are more harmful at Wave 1, after switching to bidis at Wave 2, the majority then said there is no difference in harm. Analyses on these product switchers suggested that tobacco users who change products are more likely to subsequently change their perceptions of risk of those products to be more in line with their behaviour, supporting theories of cognitive dissonance and motivated reasoning. These findings were not replicated within the smaller samples of respondents who switched products between Waves 2 and 3, but certainly deserve further research as the majority of data from this dissertation suggest that product risk perceptions represent a biased cognition to justify one’s harmful tobacco use behaviour, which may also inform tobacco cessation interventions.