Migration and Integration in Nairobi, Kenya: Refugee Rights, Social Capital, and Livelihoods in an Urban Environment 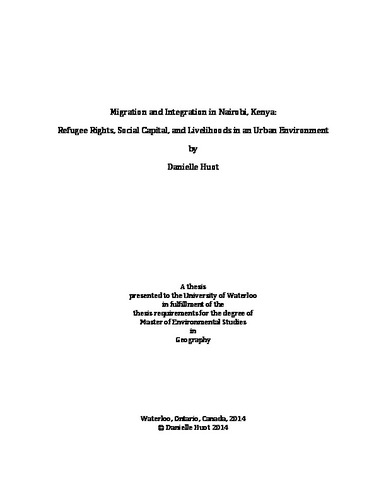 Kenya has been a major hosting nation for refugees and asylum seekers from the Horn of Africa for the past two decades. Since the early 1990s, Kenya has operated under an encampment policy that mandates all refugees reside in camp areas. Notwithstanding legal constraints to their freedom of movement, refugees are increasingly found in urban areas. This, in fact, is a global phenomenon, with the UN Refugee Agency estimating that two-thirds of the world’s refugees currently reside in cities. Urban-based refugees introduce nuanced challenges to refugee governance and integration as the communities are often unregistered, dispersed over large areas, and function largely within spheres that are culturally, socially, and economically segregated from the host society. Refugees in Kenya are subject to the provision of certain rights under the 1951 UN Convention Relating to the Status of Refugees, including the right(s) to legal documentation, employment, public services, housing, and protection from human rights abuses. Despite this, displaced communities in Kenya face a number of systemic and institutional vulnerabilities that manifest as conclusive barriers to integration. This thesis explored the experiences of 32 refugees and asylum seekers of Somali, Ethiopian, and Eritrean descent in order to examine urban refugee access to Convention rights, and investigate their legal, social, and economic states. In accordance with the data presented in this study, urban refugees were found to be a poorly-integrated, institutionally under-supported, stigmatized community, navigating deeply ingrained xenophobia, exclusionary public policies, and a highly convoluted path to legality. Conclusive of this study, refugees do not have ready access to their Convention rights, which implies that Kenya is not fulfilling its international obligations as a host state under the 1951 UN Convention. The thesis further examined causes of displacement and found that, despite being largely illustrated in the literature as a community lacking agency, urban refugees display high levels of interaction with traditional push-pull migration knowledge, and have established deeply enmeshed community networks that provide fundamental access to security, livelihoods, and housing.