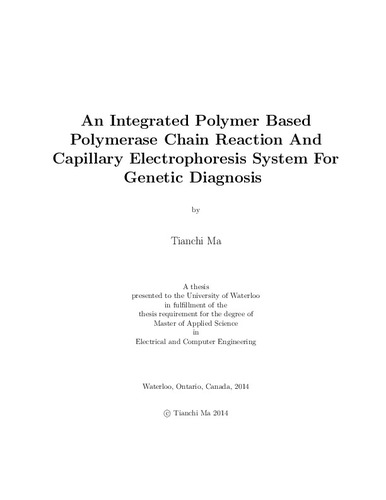 Micro-Total-Analysis-Systems (µTAS) for genetic diagnosis have a great potential to revolutionize the future of health care. However the lack of µTAS, which is fully integrated, mass-producible and application oriented, has delayed µTAS development in real life application. In this work, I developed designs, protocols and supporting infrastructures for a polymer-based, fully integrable genetic diagnosis system capable of the Polymerase Chain Reaction (PCR) and Capillary Electrophoresis (CE). Each individual module could be integrated through a novel valve/pumping design and is fully capable of hand-free operation. These modules have been demonstrated to have a separation similar to our previous generation glass-based chips, which have previously proved the capability of genetic diagnosis. The integrated PCR module has demonstrated the concept of a CMOS compatible PCR system that is capable of mass-production. These discrete PCR modules are rapid prototypes. Using laser-based and milling machine-based rapid prototyping methods, the fabrication processes and module designs were developed. During this, the designs were studied through simulations and back-of-the-envelope (BOE) calculations. At the time of writing, the valving, PCR and CE modules have been successfully tested (with publications in print, in press and underway). In addition, a valving and CE combination has also been successfully demonstrated for a restriction fragment length polymorphism (RFLP) diagnostic and submitted for publication. All of these designs were intended to be developed in a manner that could be implemented in a PMMA chip, or on a future CMOS chip for greater cost reduction. This work has developed some of the key technologies for PCR-CE in a way that is scalable to such a CMOS system, notably with valves that can be used in a hybrid PMMA/CMOS system, and in testing a silicon based and robust temperature control system that could be implemented on CMOS.