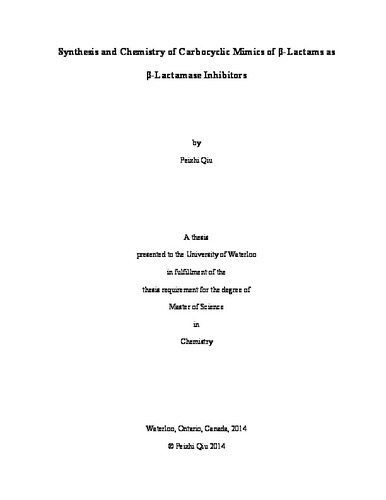 Antibiotics are very important chemical substances, which have saved millions of lives. However, bacterial resistance towards antibiotics, especially the β-lactams, is becoming increasingly serious. Currently, the β-lactam antibiotics are seriously threatened by β-lactamases that are able to efficiently hydrolyze the β-lactam. According to Ambler's classification, Class A, C and D enzymes are serine β-lactamases (SBLs), in which the hydrolysis of β-lactams is initiated by the serine residues in their active sites, whereas Class B enzymes are metallo β-lactamases (MBLs), which contain a zinc-bound hydroxide as the nucleophile to hydrolyze the β-lactams. At present, two feasible strategies are used to relieve the threat of β-lactamases, including discovery of novel antibiotics and development of β-lactamase inhibitors. The cyclobutanone mimics of β-lactam antibiotics were first studied in the early 1980s. They are potential inhibitors of β-lactamases because they might form an enzyme-bound hemiketal or an enzyme-bound hydrate with the serine β-lactamases or metallo β-lactamases, respectively. In addition, due to the similar structure to the corresponding β-lactams, they might inhibit D-Ala-D-Ala transpeptidases, which are the targets of the β-lactam antibiotics. An efficient procedure to prepare the parent cyclobutanone 2.5α was successfully developed in this lab, providing 33% overall yield for 7 steps. In addition, a series of cyclobutanone analogues were prepared in this lab previously. Among them, the C3α-OMe substituted cyclobutanone 2.30α showed considerable inhibition of common β-lactamases including KPC-2, IMP-1, VIM-2, GC1 and OXA-10. In this thesis work, the preparation of the parent cyclobutanone 2.5α is discussed in detail, which then was converted to the corresponding benzhydryl ester 2.44. Synthetic studies towards C7-modified cyclobutanone derivatives are described, involving a very essential condition for the monodechlorination of 2.44, which is considered as a milestone for this project. This opened the door for further modification at C7 of cyclobutanones. Next, hydroxymethylation was carried out at the C7 position through a known aldol condensation procedure, which provided C7-chloro-hydroxymethyl derivative 2.60β. Fortunately, the single crystal structure was obtained successfully, confirming the stereochemistry of 2.60β. In addition, further dechlorination of 2.60β was performed in order to obtain the cyclobutanone derivative 3.50β with the alternative configuration at C7 bearing the hydroxymethyl side chain, which might be a potential β-lactamase inhibitor. Benzoylation of the C7-chloro-hydroxymethyl derivative 2.60β was successful. This paves the way to introduce various functional groups to the side chain to interact with the active sites of β-lactamases. Eventually, the corresponding hydrate formation and bioactivity tests of the newly prepared cyclobutanones were carried out. Monochloro acid 2.58β generated 25% of hydrate at equilibrium and showed considerable inhibition of some Class B and Class C β-lactamases such as IMP-1, VIM-2, SPM-1, L1 and GC1, when at a high concentration (500 μM). Cyclobutanone 2.58β combined with meropenem exhibited a synergistic inhibitory effect against a clinical isolate of the human pathogen Stenotrophomonas maltophilia that produces the β-lactamases L1 and L2.