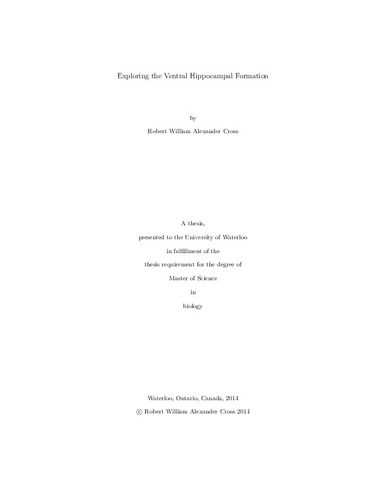 The hippocampus (HC) is important for both memory and spatial navigation. These functions are thought to be supported by spatial firing patterns of "place cells" which are active in only certain locations within environments. Downstream from the hippocampus lies the ventral striatum (vStr), a structure involved in the motivational control of behaviour. While hippocampal cells have strong modulation by place, ventral striatal cells have strong modulation by rewards and cues that predict them. Together with the ventral striatum, the hippocampus forms a functional circuit in rats, thought to associate place representations with rewards in a context-, or situationally-, dependent manner. However, within the hippocampal formation there is an intermediate structure in the place-reward circuit between HC and vStr, the ventral subiculum. Due to its intermediate location between HC and vStr, the ventral subiculum is expected to combine aspects of hippocampal place related, and ventral striatal reward-related activity, in a context-dependent manner. However, while ventral subiculum has been implicated in context discrimination by studies performing lesions of that structure, little research exists on how ventral subicular cells are modulated by place, reward, or different contexts. Additionally, while the firing patterns of dorsal hippocampal cells reorganize between different environments, we currently have less evidence of this contextual discrimination in the ventral hippocampal cells that are more directly connected to the ventral subiculum. This project therefore explores ventral subicular cell modulation by place, context, and reward-related stimuli, while examining responses to changes in environmental context in the ventral hippocampus. To explore these structures, 5 male Long-Evans rats were implanted with dual-target implants, 4 of which performed a biconditional discrimination task (Context A: Cue 1 –> reward, Cue 2 –> no reward; Context B: Cue 1 –> no reward, Cue 2 –> reward) while recordings were made from ventral hippocampal formation targets. Local field potentials (LFP) were analyzed for spectral power and event-related signals, while neural firing activity was examined for event-related modulation of activity and evidence of context discrimination. Behavioural results show that as a group, rats learned to perform the task, although not all rats learned equally well. Preliminary evidence is presented for context-modulated event-related activity in ventral subiculum, and context-modulated neural firing rates in ventral hippocampus, as well as evidence for peaks in signal power in the theta (6-10Hz), delta (1-4Hz) and gamma (low gamma ~50Hz) frequency ranges in ventral subicular local field potentials. Thus, a preliminary examination of the ventral hippocampus and ventral subiculum shows functional intermediaries, combining context and reward-related signals.