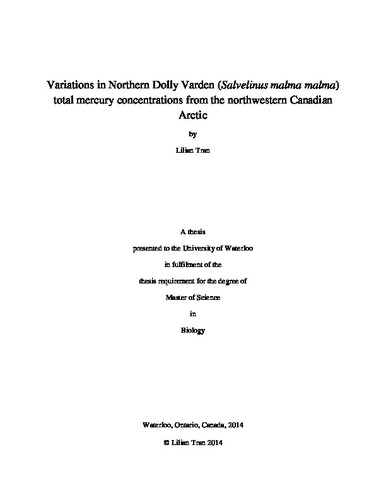 Mercury (Hg) is a ubiquitous contaminant with harmful impacts on the aquatic ecosystem as well as human health. Studies to date of the bioaccumulative effects of Hg on northern fishes have focussed on all but one of the key species consumed by humans. The exception is the Northern Dolly Varden (Salvelinus malma malma), prized as a food resource in the western Canadian Arctic. Northern Dolly Varden contaminant data were twinned with δ13C and δ15N stable isotope signature data as a means of relating observed variations in total mercury (THg) to feeding strategies. The objective of this thesis was to use archival tissue samples obtained from populations separated by space, time and life-history type to examine the spatial, temporal and life-history trends in Northern Dolly Varden THg concentrations as well as build a historical baseline against which future changes in contaminant loading may be assessed. Historical THg spatial trends for anadromous Northern Dolly Varden were determined from 10 populations in the Yukon and Northwest Territories sampled across a range of latitudes (67-69° N) and longitudes (136-141° W) between the years 1988-1991. Unadjusted mean THg concentrations ranged from 15 to 254 ng/g wet weight (ww). Length-adjusted THg concentrations were significantly different among sites, but were not related to latitude or longitude. Within and among populations, THg was significantly related to fork-length, age, δ15N, and δ13C, with the variation in THg found among populations being best explained by size. The data serve as an important baseline against which future changes in THg levels in this important subsistence fishery may be compared to determine the significance of any observed trends. To understand the importance of life-history type on THg, THg concentrations were measured in isolate, resident and anadromous Northern Dolly Varden from the Babbage River, Yukon Territory, Canada. Differences in mean THg concentrations were found starting at 22 ng/g ww in isolate, increasing to 56 ng/g ww in resident, and 108 ng/g ww in anadromous fish. The pattern is markedly different than that observed in other migratory charr species where anadromous fish typically have lower levels of THg. After adjusting THg to a standardized age and length, significant differences remained among the life-history types, with anadromous Northern Dolly Varden having the lowest THg concentrations. Trophic position was the most important factor in explaining observed differences among the individuals regardless of life-history types, with growth rate also contributing to explaining the variation among individuals. The contrast of higher absolute, but lower age and size adjusted THg levels in anadromous fish was explained by a combination of two counter-acting mechanisms, including: 1) a switch to feeding at higher trophic levels and the use of prey with higher THg concentrations in the marine environment that raises THg levels, and 2) somatic growth dilution that decreases THg as fish age and increase in size. Temporal changes in Northern Dolly Varden THg concentrations were assessed between periods 1986-1988 to 2011-2013 from the Rat (67° 46’ 48”N and 136° 19’ 12”W) and the Firth (68° 40’ 12”N and 140° 55’ 12”W) rivers in the northwestern Canadian Arctic. In the Rat River, mean THg ranged from 79 ng/g ww in 1986-1988 to 109 ng/g ww in 2011-2013, while in the Firth River, THg ranged from 126 ng/g ww in 1986-1988 to 178 ng/g ww in 2011-2012. After factoring in size, δ13C and δ15N, THg increased significantly over time. Relationships between log[THg] versus fork-length and log[THg] versus δ13C have remained constant over time in the Rat River, but not in the Firth River, while relationships between log[THg] versus δ15N have remained constant in the Firth River, but not in the Rat River. Although increases in temperature coincide with increases in THg, the effects are not direct.