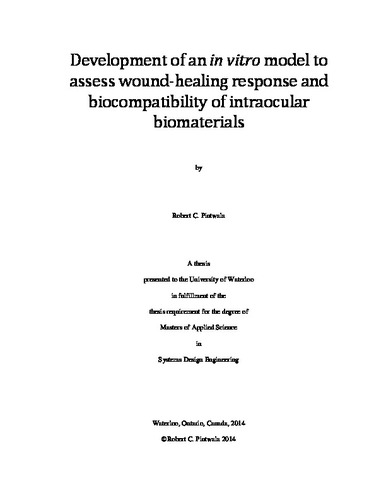 Macrophages are master regulators of inflammation, fibrosis and wound-healing throughout the body. However, little work to date has examined their role in the inflammatory and fibrotic diseases of the eye. Mounting evidence for macrophage participation in the failure of intraocular implants (called posterior capsule opacification or PCO), and the well-established role of dysfunctional macrophage behaviour during diabetes motivated this investigation. A novel in vitro model of macrophages and lens epithelial cells in co-culture was developed and first used to investigate the macrophage response to common intraocular lens materials, and the possible effect of this response on lens epithelial cells. We observed significant inflammatory macrophage activation and reduced macrophage adhesion by hydrophilic implant surfaces compared to hydrophobic ones. However, the macrophage response to both materials induced the same degree of inflammation in lens epithelial cells. In agreement with previous studies, we conclude that macrophage adhesion and activation are inversely related, and that net inflammatory effect is a function of the degree of macrophage activation and the number of activated cells. The in vitro model was next used to explore the development of diabetic cataract. During hyperglycemic conditions a significant disruption of macrophage protein expression and delayed macrophage cell-death were observed, which may explain adverse inflammation in diabetes. Lens epithelial cell phenotype remained unchanged, though results from our in vitro model also suggest that lens epithelial cell death as a result of hyperglycemia occurs through a mechanism other than apoptosis, in agreement with the literature. We therefore provide additional evidence to the hypothesis that diabetic cataracts are a product of accumulated oxidative stress during hyperglycemia. Our findings provide a new method of inquiry into macrophage biocompatibility testing of intraocular materials, specifically through quantification of macrophage cell-surface markers and lens epithelial cell cytoskeletal elements.

Robert Pintwala (2014). Development of an in vitro model to assess wound-healing response and biocompatibility of intraocular biomaterials. UWSpace. http://hdl.handle.net/10012/8909