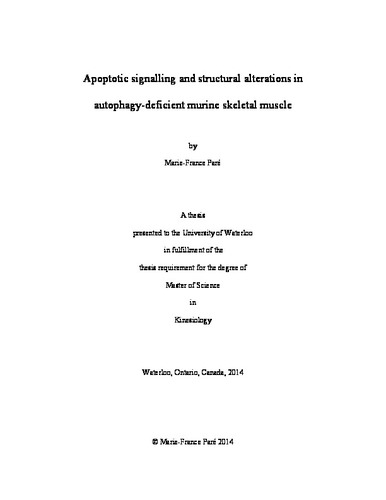 Autophagy is a catabolic process by which the cell targets and degrades cytoplasmic materials, such as proteins and organelles. Autophagy is required for the control of muscle mass under catabolic conditions, but is also active basally to maintain myofibre homeostasis. The purpose of this thesis was to characterize the role of autophagy in the maintenance of skeletal muscle morphology and cellular health. A conditional muscle- specific Atg7 knockdown mouse model was used to examine the morphological, apoptotic, proteolytic, and proteasomal response to autophagy deficiency in the glycolytic and oxidative skeletal muscle of 5-week and 15-week-old mice. While overt phenotypic differences were absent between the autophagy-deficient animals and the controls, structural alterations were observed at the fibre level indicating moderate damage. Atg7 knockdown resulted in significant age-dependent accumulation of the autophagic markers LC3I (p<0.001) and p62 (p<0.01) in both oxidative and glycolytic muscle. Evidence of the upregulation of apoptosis was observed in the autophagy-null animals, including Bax expression (p<0.05) and nuclear translocation of AIF to the nucleus (p<0.01). The proteolytic activities of caspase-8 (p=0.06) and calpain (p<0.05) were also increased with autophagy knockdown. Reactive oxygen species (ROS) generation was not affected by Atg7 knockdown, nor were markers of mitophagic degradation. Several of the apoptotic and mitophagic measures revealed differences between the observed age groups, highlighting a role for degradative and cell death processes in skeletal muscle growth and development. Together, these findings point towards moderate but accumulative damage in autophagy-ablated skeletal muscle. The present work contributes to the existing literature demonstrating the importance of autophagy in the maintenance of skeletal muscle health.