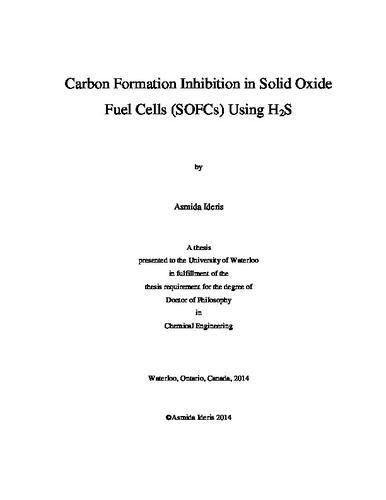 Solid oxide fuel cells (SOFCs) are promising devices for power generation due to their high efficiency and clean operation. Another prominent feature of SOFCs is their ability to operate with not only H2 fuel but also hydrocarbons and syngas. Unlike many other fuel cells, SOFCs also are capable of utilizing CO as fuel. This flexibility with respect to fuel lessens the dependency on pure H2 and complex fuel processing and has increased the interest in SOFCs as an alternative power source. However, their widespread commercialization is still hindered by high cost and poor long term stability associated with high temperature operation and carbon deposition at the anode when fuelled with hydrocarbons. The main objective of the research described in this thesis was to introduce and investigate a method to mitigate the effects of carbon formation in Ni-based anodes operating at intermediate temperatures with hydrocarbon fuels (e.g., CH4). Ni-samaria-doped-ceria (Ni-SDC) anode-supported cells were fabricated and their performance and susceptibility toward carbon deposition were studied when operating galvanostatically with various fuels including CH4 and CO-CO2 mixture at intermediate temperatures (550-700ºC). Ni-SDC anode-supported cells operating with CH4 and CO-CO2 were strongly affected by the temperature when the cell performance with CH4 was found to be more stable during operation at 700ºC than at 600ºC. The maximum power density of the cell with CH4 as fuel was found to be higher than that achieved with H2 as fuel at 700ºC. Meanwhile, the cell voltage during operation with CO-CO2 fuel was more stable at 600ºC than at 700°C. Degradation of the performance of the Ni-SDC cells with CH4 and CO-CO2 fuels under conditions where carbon formation is thermodynamically favored was found to be relatively small despite the fact that significant amounts of carbon accumulated in the anode. This may due to the fact that carbon deposited predominantly at the surface of the anode closest to the fuel entry point. Sulphur in the form of H2S was introduced into the SOFC at ppm level concentrations to evaluate its effect as a potential carbon inhibitor in a cell operating under dry CH4 at 700ºC. Two methods for exposing the anode to H2S were investigated: i) continuous introduction throughout cell operation as part of the gas feed stream and ii) introduction as part of a mixture with H2 only for a short period of time as a pre-treatment before regular operation with dry CH4 alone. These studies showed that continuous feeding of H2S within the dry CH4 fuel at the level of only a few ppm (10 and 2 ppm) was enough to cause catastrophic failure of the cell within ~20 hrs due to the poisoning effect of H2S. On the other hand, the introduction of H2S at a level of 2 ppm in dry H2 into the cell for 30 minutes as an anode pre-treatment before switching to dry CH4 was very successful and enabled the SOFC to maintain stable performance for over 100 hours of operation under dry CH4, with a lower degradation rate than that observed when a cell was not pre-treated with H2S. This pre-treatment did not affect the methane conversion significantly during the subsequent galvanostatic operation with dry CH4. The presence of H2S influenced the type of carbon formed depending on the manner in which the H2S was introduced into the SOFC. Carbon deposits that formed during operation with dry CH4 alone after the 30-minute pre-treatment with H2S were more easily removed than those produced when the fuel contained dry CH4 alone or H2S-containing fuel was introduced continuously over the entire run. The introduction of H2S for a short duration prior to shifting to dry CH4 suppressed the formation of graphitic carbon at the anode. The amount of carbon formed on the cells during CH4 operation was estimated by shifting the gas stream to humidified H2 while maintaining the applied current unchanged and measuring the quantity of carbon-containing gases evolved. These measurements revealed that less carbon was deposited in a cell that had been pre-treated with H2S prior to 100 hrs of operation with dry CH4 compared to a cell that had not been exposed to H2S. This analysis also showed that the procedure of flowing humidified H2 into the cell after operation with dry CH4 while maintaining the same current appeared to remove carbon from the anode and reduce the rate of degradation of the cell voltage.