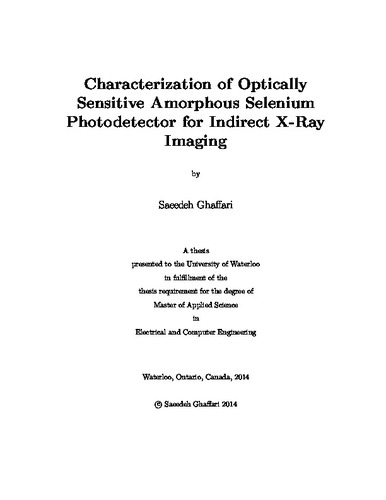 Advances in medical imaging have significantly improved patient care, and considering all modalities X-ray imaging is historically the pioneer. Recently, there has been an ongoing interest in development of large area digital X-ray systems with possible advantages including improvement of image quality and dose efficiency. Amorphous selenium (a-Se) is one of the most highly developed photoconductors used in digital X-ray imaging (direct and indirect conversion) where it has been adapted from use in xeroradiographic photoreceptors. One of the challenges associated with a-Se based photodetectors is high dark current at applied electric fields >10V/µm due to the injection of charge carriers (mainly holes), which can be resolved by introducing hole and electron blocking layers. The primary focus of this research is to investigate different aspects of a-Se based photodetectors with polyimide (PI) as a hole blocking layer. In order to achieve the most efficient device, the dark (Idark) and photo (Iph) responses for different thicknesses of PI (varied from 0.4µm to 2.5µm) have been studied. The photoconductivity ratio (Iph/Idark) suggests that the sample with 1µm PI has the best response in the high electric field region of operation (>10V/µm). Further, in order to find the exact electric field within the a-Se in the PI/a-Se structure, time of flight (TOF) measurements have been carried out for different thicknesses of PI. Based on the TOF measurements, the electric field within the PI layer has to reach 138V/µm to provide good conduction. Moreover, the hole mobility of 0.11cm2/V.s at 12.8V/µm electric field for a-Se has been calculated, which is consistent with the previously reported results. Another aspect of a detector which is critical in high frame rate imaging applications is temporal performance (lag and ghosting). In this study, the time dependence of dark current after illumination at different temperatures and under various electric fields has been investigated. Based on the results and the proposed theoretical model, the lag behaviour in a-Se photodetectors depends on inherent properties such as the density of trapped states (holes) and the hole release time constant. According to our fitted model, the hole detrapping time constant has been found to be 26 and 170 sec at room temperature with a calculated trapped hole density of 1.25x1011 m-3 and 3.4x1010m-3 at 10V/µm electric field. These values correspond to the existence of different interface defect states for holes in the bulk of a-Se. Finally, the temperature stability and durability of the a-Se photodetector with PI has been investigated to determine the extent to which the device can handle environmental stresses (high temperature) during transportation and storage. Comparing the photo and dark responses of the device before and after stress indicates no significant degradation, which implies a contribution of PI to the reliability of the a-Se photodetector.