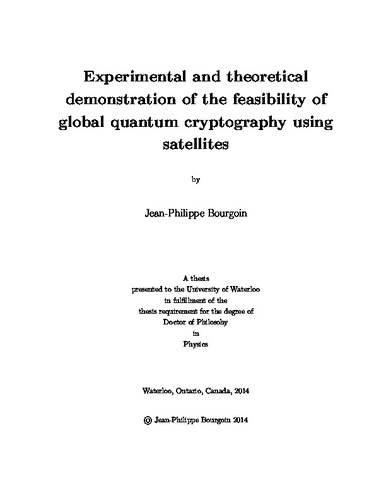 Information security is a growing concern in our modern world, where almost everything can be done online. To protect security, classical encryption protocols, such as RSA, are used. These encryption protocols are almost always based on mathematical problems that are computational difficult. Therefore, the security is only valid under limited computational resources, and therefore do not provide provable security. An exception is the one-time pad protocol, which is provably secure but requires an existing shared key that is as long as the information it must encrypt. The exchange of such a key can be challenging, often requiring the two partied to physically meet to exchange the key or the use a trusted courier to physically carry the key on a hard drive. Quantum key distribution (QKD) offers a solution by utilizing quantum mechanics to grow a secure cryptographic key shared between two distant parties. The quantum nature of the particles used in the exchange ensure that any eavesdropper would leave signs of their presence, allowing the users to precisely quantify the security of the key that is produced. This allows secure generation of a random key which can be used for the one-time pad encryption protocol which, unlike most encryption protocols, does not rely on computational assumptions, and is secure regardless of available computational power. Current implementations of QKD are limited to a single link distance of ≈200 km, preventing implementation of QKD on a global scale, or even between distant cities within a single country, without some additional techniques. One promising solution is the use of orbiting low Earth orbit satellite platforms as trusted nodes in a quantum communications network. The main purpose of this work has been to show the viability of this solution, trough theoretical performance modeling and experimental demonstrations. Thorough numerical simulations have been developed to evaluate the performance and challenges in implementing QKD using a low Earth orbit satellite platform and determine an optimal approach to its implementation. The simulations include a realistic satellite orbit analysis, all expected loss mechanisms, estimates of background contributions and realistic simulation of quantum optical processes. This work addresses the questions of optimal wavelength and beam waist, the effect of the telescope design and pointing error, and the impact of detector degradation due to exposure to radiation in the space environment. The simulation is used to determine the length of secure key for QKD and the performance of fundamental quantum optics experiments such as Bell tests and quantum teleportation. We compare the advantages and disadvantages of uplink and dowlink scenarios, and show that an uplink, despite having reduced performance compared to a downlink, offers more scientific freedom, by allowing changes to the quantum source, and benefits from a simpler satellite design with reduced pointing requirement. This work provides a theoretical foundation for ongoing design and development of quantum systems for satellite implementation of QKD. In addition to theoretical analyses, experiments where developed and conducted corresponding to the challenges likely to be faced by a satellite uplink. Two main challenges where identified and experimentally overcome. First, the difficulty of operating in the high loss regime of a satellite uplink, which typically experience losses in the range of 40-50 dB when above 40° of elevation from the horizon, an elevation only reached by half of the satellite passes. This challenge was addressed by demonstrating full QKD protocols at losses exceeding 50 dB. Also, the ability to perform full QKD during the short duration of a satellite pass was shown by replicating the varying loss of archetypal passes and successfully extracting secure keys. Secondly, the difficulty of accurately tracking and pointing to a receiver platform traveling at the high angular speed of a satellite was overcome by successfully exchange quantum signals to a truck traveling at angular speeds exceeding that of a low Earth orbit satellite. This required the design, construction, and implementation of a transmitter system and a quantum receiver system capable of active pointing using a custom pointing system. An additional experiment was also performed where we experimentally investigate the feasibility of performing QKD using light scattered by a diffusive screen. A system capable of doing so could be used to create QKD hot-spots, where a QKD source could be aimed at a diffusive screen to allow multiple users to simultaneously exchange secure keys with the source without the need for high precision pointing. Through these analyses and experimental demonstrations we evaluated the performance of QKD using a satellite and have shown its technological readiness to be implemented. Implementation of such a system would allow QKD to be performed on a global scale, enabling communications security that is not based on computational assumptions without the need to physically transport the key from one party to the other.