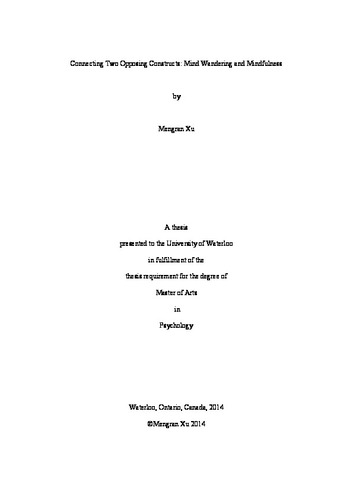 Mind wandering is a universal phenomenon that accounts for almost half of our everyday experience (Killingsworth & Gilbert, 2010). Although there are demonstrated benefits to mind wandering, it comes at quite a cost, especially when we need to concentrate on current tasks (Mooneyham & Schooler, 2013). Hence, there is a great demand to identify strategies that reduce mind wandering and ameliorate its disruptive impact on task performance. Mindfulness, a construct that is inherently opposite to mind wandering, has recently emerged as a promising antidote (Schooler et al., 2014). However, there has been very limited research examining the direct effects of mindfulness on mind wandering. Furthermore, research paradigms on mind wandering might also provide a unique channel for us to further understand the underlying working mechanism of mindfulness as an emotion regulation strategy. To answer these questions, we conducted two studies in which both mind wandering and mindfulness were examined. Study 1 explored the operationalization of mind wandering and the relationship between mind wandering and motivation to attend to thoughts and to perform well on the task at hand during a sustained attention task. Results support the use of both task-relatedness and stimulus-dependency for classifying episodes of mind wandering. Analysis revealed a significant mediational model in which the relationship between performance motivation and overall task performance is mediated by the proportion of on-task thoughts when controlling for positive affect. Study 2 examined the effects of a 10-minute mindfulness meditation among highly anxious individuals using the same research paradigm. When compared to a control condition, meditation shifted the focus of attention from internal information towards external stimuli and prevented task performance from declining during episodes of distractions. Meditation also demonstrated additional benefits in emotion regulation and provided some insight into its underlying mechanism. Implications of these findings and the relationship between mind wandering and mindfulness are discussed.