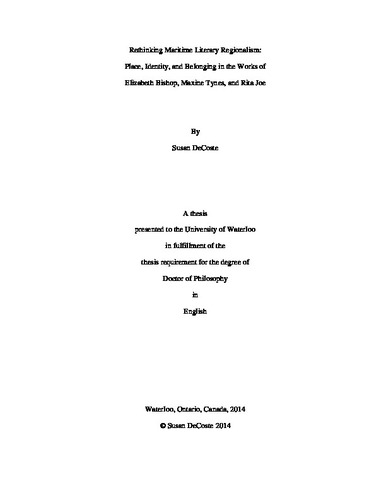 In this dissertation I argue that the dominant concept of Maritime literary regionalism is informed by a Euro-settler definition of belonging, one that prescribes an author’s long-term residency and family history in a single place as prerequisites for an “authentic” regional identity. This dominant concept of regionalism represents a narrow framework that excludes the voices of many writers, and results in the loss of important and diverse explorations of place, identity, and belonging in Maritime writing. I begin the dissertation with a chapter that surveys twentieth-century Maritime regional literature and criticism in order to establish how Euro-settler critics like Fred Cogswell and authors such as Frank Parker Day, Charles Bruce, and Ernest Buckler construct and circulate the idea of an “authentic” claim to the land. Engaging with feminist theory, theories of regionalism and globalism, African diaspora studies, and postcolonial Indigenous thought, the subsequent chapters challenge this Euro-settler model of literary regionalism through detailed examination of the oeuvres of three important twentieth-century female poets, Elizabeth Bishop, Maxine Tynes, and Rita Joe. Through analysis and exploration of spatial perspectives and surrealism in Bishop’s poems and memoirs, the chapter focused on Bishop argues that regionalism does emerge in her writing even though she has lived in, and writes about, many places throughout the Americas. Bishop’s regionalism makes as its defining feature not a particular place, but the speaker’s perspective on place from an ever-changing position between a local community and the globe. In the next chapter, I draw a comparison between the work of Tynes and that of George Elliott Clarke in order to show that a land-claiming regionalism does not have to be an exclusionary discourse that favours only one race, since African descendants have also had long histories on Maritime land. At the same time, Tynes’s work challenges the idea that regional identity should rely on a single area of land, since that identity must also take into account the history of people in the many places they and their ancestors have lived. In the final chapter, I argue that Joe’s poems about Mi'kmaq territory depart from an anthropocentric version of regionalism that situates human beings at the top of a hierarchy of living things as their masters. Joe’s poems demonstrate relationships to land that extend beyond possession, control, and occupation, and emphasize a collaborative, interconnected, and ongoing relationship between all living things on the land. In engaging with Bishop, Tynes, and Joe as a variety of diverse voices that explore relationships to the region, my dissertation attempts to open the discursive space of Maritime literary regionalism to allow for multiple and inclusive possibilities for belonging.